The 14-year-old from Dublin, one of Ireland’s upcoming driving stars, wants to make it all the way to the top 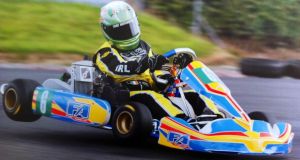 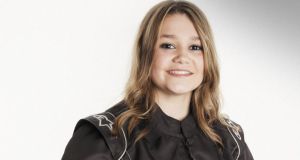 This is not the sun-dappled, money-fuelled majesty of Monaco. It’s Tynagh, a small village near Loughrea, Co Galway. There are no skyscrapers, no mirror-finished pit-buildings, no lavish motorhomes. Whatever it is, it isn’t glamorous.

Still, though, there is a track. A track with fast, challenging corners, the first rung on the treacherously slippy, unpredictable ladder to the top of motorsport. It will soon be treacherously slippy on the track (here comes the rain again . . .) but this is where first racing dues are paid. In karting.

We’re not talking about the the kind of industrial estate warehouse karting that draws stag weekends and wannabe racers (though you can do that here, too). No, if you’re racing on the 1.5km track at the Pallas Kart Track (reputedly the largest such track in Europe), you’re no wannabe – you’re already a racer.

The familiar signs are there: the trim build, the confident walk, the blank, Stig-like stare of the helmet visor. Obviously a racer; the laid-back style in the kart – leaning back in the seat, arms outstretched – speaks of smoothness and a relaxed nature at the wheel. Another talented youngster taking their first steps on the road to racing glory?

Yes, she is, and if you reacted with any surprise that this driver is female, well, perhaps you’re not alone. No less a motoring luminary than Stirling Moss recently claimed that women simply don’t have the mental faculties to win at the peak of motor sports. The man often portrayed as the most talented driver of all may have just said that Nicole Coffey is wasting her time at this racing lark.

But Coffey sits back slightly on the sofa of her cramped camper van and responds: “I kinda took that into consideration and thought that that’s not really true. Girls and women have to do so much stuff – they have to take care of kids, clean and everything, but they can also be anything they want. Women aren’t supposed to be sportswomen? Women can be anything in the world – astronauts, pilots. So women can go to F1 and can prove, with the talent and the right team, that they can win in Formula One.”


Three championship wins
Confident and well-spoken, Nicole disproves Moss’s comments every time she heads out on to the track. Already, she’s won three championships – the All-Ireland Karting Championship, the Munster Karting Championship and the Southern Championship. She’s also represented her country at a major FIA (Federation Internationale de l’Automobile – the global governing body of world motor sport) karting event in Bahrain. Out of 60 drivers, from every country, background and budget level, the girl from Dublin came sixth.

“When I was younger, my Dad actually bought me a pedal kart, and then every weekend on a Sunday, we used to go out and because we had a long driveway he used to set down cones, and I used to go out and go in between the cones and he’d time me. And every time I’d want to go faster and faster, so I think that was how it started.

“So then, when I was four or five, Dad was watching Formula One races and I started watching them with him and I was really interested in them. So then when I was 10 we went to a place called Kylemore Karting and did a little driving there. He and I went out once and he let me go ahead and couldn’t catch me at all. He decided then that I’ve got some talent, so let’s see where we go with it.”

Perhaps it’s gauche or just a bit old-fashioned to ask if it’s difficult being a girl in a boy’s world, but I had to find out if Nicole had been made welcome by the inevitable boys’ club in karting. The answer? Yes, but only once they worked out she was good enough to beat them.


Pushed off the track
“At the start it was definitely a big... situation because people didn’t like a girl beating them and they used to push me off the track, so I had some bad results. But as I grew up, it kinda stopped because they knew that I had some talent and they took me into consideration and started treating me the same as everyone else. For me, my main goal is to get to Formula One and prove that I can win.”

Getting from here to Monaco, Monza and Montreal is not just about talent but, as her dad, John, pointedly tells me, “nothing to do with gender and everything to do with bank balance”.

She’s on the right path, working with the same sports management company as rugby star Paul O’Connell and winning just about everything she enters. The following day, Nicole wins both her finals and sets the four fastest laps on another wet and windy Galway afternoon.

Another rung climbed. Many slippery and treacherous rungs still to go.