Diesel: perhaps not quite as dead as we thought 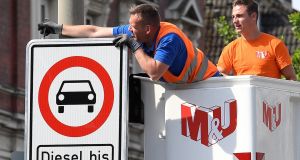 Traffic signs which ban diesel cars are installed by workers at the Max-Brauer Allee in downtown Hamburg, Germany May 16, 2018. Photograph: Reuters

Diesel has been under constant assault since September 2015, when Volkswagen was accused of, and eventually admitted to, massively cheating on its emissions tests, both in Europe and the US.

Every week, another major car maker announces that it will soon stop making and selling diesel engines, while current owners of diesel models fear that they are about to lose their shirts thanks to plummeting second hand values. Adverts shriek that ‘diesel is dead’ and the market seems more tentative and uncertain than ever before.

Should it be? Probably not. What if I were to tell you that diesel still has a useful part to play, and that diesel-fuelled engines can be every bit as clean as they need to be?

Let’s start with as good an example of a new diesel-engined car as you’re likely to find - the new Honda Civic 1.6 iDTEC. The current Civic is another one of those Hondas that finds ways to challenge you with its style, but it has looks that grow on you, an interior that’s spacious and well-made, and a chassis that entertains like few others. It is a brilliant car to drive.

And it has probably the best diesel engine you can currently buy. Honda’s 120hp 1.6-litre diesel has never, thus far, been accused of any improbity when it comes to its emissions, so if nothing else your conscience can rest easy. So too can your ears - it is astonishingly quiet for a diesel engine, with only the most muted of clattery rumbles at low speed giving away the fuel source. It’s also very economical. In spite of my leaden-footed driving technique, I struggled to get it to do worse than 5.3-litres per 100km (53mpg), and that’s with plenty of worst-case stop-start-stop driving on school runs. It is a brilliant engine, mounted in an already brilliant car.

Should you buy it, though? I mean, in an existential sense? Or are you setting yourself up for a world of financial pain?

Well, according to John Saunders, sales and marketing director for Honda in Ireland, yes you should. Okay, so of course John is going to tell you to go out and buy his new car, but he still has some interesting points to make regarding diesel power. “If you look at it in local terms, the crux of the diesel scenario is the regulation change in 2008. That created an artificial market for diesel. Diesel traditionally was always for the higher-mileage driver, often a commercial driver, or someone who drove a lot for their living. So that used to equate to around 20-25 per cent of our sales, across most manufacturers and brands” Saunders told The Irish Times. “It was straightforward mathematics - if you were doing the mileage, you’d pay a small premium to get a car with a diesel engine because you’d get that money back in spades. When the legislation changes came in 2008, it forced us all into diesel because we were all now taxed on our Co2 emissions. That wasn’t the motor industry, that forced us down that road. There are a lot of mentions of things like ‘oh, they sold us all these diesels and now they want to change…’ We didn’t. All we did was react to some, I would contend, very sharp, almost knee-jerk policies.

“What are we seeing now? We’re seeing that unwind. I’m not sure that policy is exactly defined in this area, so it’s a wait-and-see thing right now. The advice we’re giving our dealers, and the advice that they’re passing on to our customers, is that in the medium term - and by that I mean out to around five years, seven years maybe - in terms of vehicle ownership, if you’re doing more than 25,000km a year, then there’s value in diesel. If you’re doing less than that, then new modern petrol engine technology is fantastic, and it doesn’t come with any of the diesel particulate issues that are a worry.”

There are other factors at play, of course. On top of which Bosch, the car technology giant, says that it has created new, and affordable, systems which could take air quality and emissions out of the diesel debate.

“There’s a future for diesel. Today, we want to put a stop, once and for all, to the debate about the demise of diesel technology” said Bosch’s chief executive Dr. Volkmar Denner. “Bosch is pushing the boundaries of what is technically feasible. Equipped with the latest Bosch technology, diesel vehicles will be classed as low-emission vehicles and yet remain affordable.”

And affordability is the key. Current predictions have it that the exhaust after-treatments necessary to clean up diesel fumes (specifically the injection of AdBlue, which eliminates the nitrogen oxides (NOx) which are so harmful to human health) will be so expensive, that diesel engines will become uneconomical to design and build for any car costing less than around €35,000.

There is still a huge impetus for engineers to create cleaner diesels, though, not least because several major cities in Germany car seriously discussing the outright banning of DERV fuelled cars from their centres. Much of the recent rise of the premium German car brands - BMW, Mercedes, and Audi - has been based on the fact that they can be bought with frugal, cheap-to-run, diesels.

What Bosch has done is to create a new fuel injection system for diesel engines, a new ‘air management system’ and a way of carefully controlling exhaust gas temperatures which results, so the company claims, in readings of 13mg/km of NOx. To put that in perspective, the legal maximum reading, on the new Real World Driving Experience fuel test (RDE) for 2020 will be 120mg/km. Even under what are described as “particularly challenging urban conditions” the system keeps NOx emissions down to a claimed 40mg/km.

Denner said that his ambitious target for Bosch engineers is the development of a new generation of diesel and petrol engines that produce no significant particulate or NOx emissions. Even at Stuttgart’s Neckartor, a notorious pollution black spot, he wants future combustion engines to be responsible for no more than one microgram of NOx per cubic metre of ambient air - the equivalent of one-fortieth, or 2.5 per cent, of today’s limit of 40 micrograms per cubic metre.

Denner also called for a renewed focus on Co2 emissions, which are directly related to fuel consumption. He said that consumption tests should no longer be conducted in the lab but rather under real driving conditions. This would create a system comparable to the one used for measuring emissions.

Bosch’s findings have been challenged, but ultimately we won’t know if they’re right until the engines have been independently tested under real-world conditions. Either way, electricity seems certain to be the future of vehicle propulsion, but equally diesel seems to still have a significant role to play until that day dawns. Not yet dead, then. Not quite yet.

Sealing the deal: how to buy a house at the right price
Real news has value SUBSCRIBE