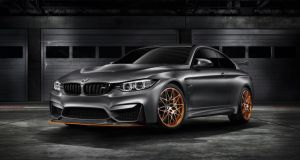 The Pebble Beach Concours D’Elegance has evolved from being a weekend beano for the well-heeled classic car owners of California into a major, global motoring event. BMW has been heavily involved in Pebble Beach for some time now, and regular brings new production and concept cars to the show. This year it’s doing both.

The 3.0 CSL Hommage we’ve seen before, in a suitably seventies shade of electric yellow. It’s based loosely on the current M4 chassis and has been designed to remind us all what a pretty, dramatic and pretty dramatic thing the original 3.0 CSL ‘Batmobile’ road and race car was. Sadly it’s not for production, a fact that becomes ever more achingly sad now that BMW has re-painted the Hommage in classic seventies M-Sport racing colours. It’s actually a direct lift of the colours worn by the original CSL when it won the US IMSA manufacturer’s title in 1975 – a feat realised at the first try.

The gold-and-black wheels are also a delicious retro throwback as are the Bavarian Motor Works stickers (expect to see replicas appearing on a ten-year-old 3 Series near you…).

Inside, BMW says that the cockpit is supposed to be a direct extension of the driver’s helmet and racing suit, and to underline that, it’s had a special race suit made for the Hommage by Puma. When the driver holds the wheel, LED lights in the sleeves, gloves and helmet light up to supposedly represent the flow of information from the wheel into the hands, arms and eventually brain of the driver. Cute.

While there’s slim-to-feck-all chance of BMW putting even a very limited edition of the Hommage into production, there is the consolation prize of the M4 GTS. Officially it’s still a concept, but you can expect to see a production version hitting streets very, very soon.

BMW hasn’t released any official figures on the car’s weight yet, but it should be lighter than a standard M4 thanks to a carbon-fibre bonnet and rear wing to go with the standard car’s carbon roof. The front spoiler is also carbon, and fully adjustable.

There are no figures for the engine as yet, but we can draw some conclusions from the experimental M4 which has been used as the Moto GP safety car this year. That car has been trialling BMW’s new water injection system, which cools the fuel-air mix entering the cylinder, allowing for more efficient combustion – more power, less fuel burn. That car was packing around 500bhp (compared to a standard M4’s 431 bhp), could do the 0-100kmh sprint in just 4.0 secs and had a top speed of 300km/h. Sounds like a good starting point for a road-going GTS…

“While the BMW M4 Coupe embodies the ideal combination of motor sport genes and unrestricted everyday usability, the BMW Concept M4 GTS previews an emotionally powerful and exclusive special model conceived with an eye for trailblazing technology and a keen focus on the race track” said Frank van Meel, president BMW M Division. “Despite its outstanding track ability, it is still fully road-legal. This is racing technology for the road in the truest sense.”