BMW i8, Aston Martin DB11 and Lexus LC excite but are no match for Porsche 911 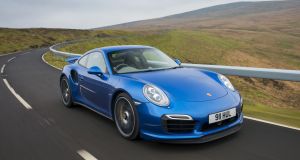 King of the supercars: the Porsche 911 cannot be beaten when it comes to responsive steering

We were all a little worried when Porsche said it was switching all mainstream 911s to turbo power. Would it be as much fun to drive? Would it sound as good? Thankfully, the answers were yes, and yes (as long as you spec it with a sports exhaust and why wouldn’t you?).

The 911 has been steadily evolving and improving over more than 50 years (the millionth example has just been built) and it shows in every laser-tight panel fit, in every precision switch movement and, most of all, in that wonderfully direct, responsive steering and the metallic howl of the the flat-six engine.

The turbo conversion was only a good thing, as it brought more power but with a genuine 35mpg on long runs. Meanwhile the Big-T Turbo model continues its quest to warp space and time with a sub-3.0 second 0-100km/h time, and the R and GT3 models continue to provide rapid-fire entertainment for marque purists.

Sum up: Every trip is a lap of Le Mans.

Generally speaking, when your shopping list contains the phrase “must have a carbon-fibre chassis, hybrid drive and exciting doors” then the price list runs to high six figures and the model names generally start with McLaren or Ferrari.

How wonderful, then, to report that a BMW i8, with its carbon chassis, its plug-in hybrid powertrain, and its incredibly cool doors, clocks in at an entry price of €152,720. Not cheap, to be sure, but far, far more affordable than any other car with a comparable spec sheet.

Of course, it’s not strictly supercar quick – a 4.4 seconds 0-100km/h time is sports car stuff these days – but that wild wedge shape, with its trick aerodynamics and those butterfly doors scream supercar to us.

Inside, it’s more practical than you could imagine with plenty of space in the front and just about room for the kids in the back. It may only run a tuned Mini Cooper S engine, but it can run on pure electric power for 23km and can embarrass a Prius with its Co2 emissions.

Sum up: An electrifying electric car.

No, it’s not James Bond’s car. True, the movie-only DB10 did introduce some of the styling ideas which trickled through to the DB11, but this replacement for the long-lived and much-loved DB9 is far classier than any movie prop.

Its styling is a little unconventional (look at it from the back to see what I mean) and the aerodynamics are tricky (slots in the bootlid create a “virtual” rear wing) but this is an Aston with character from the old school, updated for the 21st century.

The big V12 engine is now twin-turbocharged and develops a whopping 600hp, while the fiddly electric bits (sat-nav, stereo, touchscreen) all come from Mercedes and all work pretty well. The cabin is far roomier and more comfortable than it ever was in the DB9 and, with one or two exceptions, quality seems excellent. Better still is the driving.

Who knew that 600hp could be so easy, so accessible, so measured even on rain-lashed Irish roads? The DB11’s steering and chassis balance are from the top drawer and its refinement is good enough to make a midnight run to Cannes seem like an appealing proposition.

This is a different kind of supercar. With a “mere” 477hp from its 5.0-litre V8 engine, the big Lexus LC will be slower than any other car in this segment. It’s also really more of a big, 2+2 coupe, in its layout and demeanour, than a true supercar. But maybe that’s the point.

After all, who can truly deploy a faster 0-100km/h time than 4.7 seconds in their everyday lives. Do you really need a higher top speed than 250km/h? Probably not.

Would you, though, appreciate a car with genuinely rare cabin quality and comfort, combined with surprisingly precise handling and, yet, a cushioned and well-composed ride quality? And the option of a frugal, silent hybrid drivetrain?

Hitherto, our definition of a supercar has been one that sets your trousers on fire and shreds your drivers licence before the police do. It’s just possible that the Lexus LC represents a different kind of super. A kind of super that’s about more than mere performance.

Sum up: And now for something completely different.