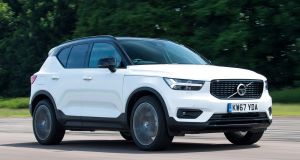 Volvo’s smallest is something of a revelation. It’s built on the Swedish company’s CMA platform, designed for small and compact models, and which is also shared with its Chinese lords and masters, Geely.

That had us worried that it might be a touch too cheap for a brand trying to muscle its way into the premium segment, and going up against the big-boy Germans. We needn’t have worried.

Yes, there are a few cheaper cabin fixtures and fittings than you’d find in, say, a V60 or an S90, but the XC40 is really a very pleasing premium crossover. Best of all, it doesn’t look like a crossover - Volvo decided, to give the XC40 some clear styling air between it and the larger XC60, that it would give the 40 upright, blocky, almost Lego-like styling.

Arguably, that’s put some customers off, and certainly in an Irish context, sales haven’t taken off the way they ought to have, but it’s still a hugely likeable car with sparky handling, a solid engine lineup (with a plugin hybrid on the way) and a roomy interior. The only flaw in all of this is that the incredibly handsome, even more practical V60 estate is in the same ballpark, once you’ve added a decent engine and spec to your XC40…

The new Evoque really is new, in spite of appearances to the contrary. Technically it’s more of a facelift than an entirely new car, but underneath its structure has changed quite considerably, and aside from the most basic front-wheel drive model, all Evoques now come with fuel-saving mild-hybrid power. There’s also a plugin-hybrid model coming soon.

The shape is certainly familiar, albeit enlivened a little by new details such as a smoother-looking ‘face’ and doorhandles that fold, flush, into the bodywork. Inside, the cabin design is also largely carry-over, but you do get handsome digital dials and the double-decker touchscreen layout from the larger Range Rover Velar.

There’s a bit more interior and boot space than in the old Evoque too, and quality also appears to have taken a turn for the better (although as ever with Land Rover, long-term reliability will need careful watching). Best of all, it’s an utter delight to drive - smooth and refined on motorways, and almost hot-hatch like when you get it on a twisty road. Pricey, in this company, though.

The Audi Q3 is what we generally refer to as a handsome little bugger. Except it’s not that little anymore, with much more cabin space than the first-generation Q3, and a much higher quality cabin at that. The cabin draws heavily on such cars as the larger Q5 and even the big A7 for inspiration, with its all-digital dials and the big touchscreen in the centre of the dash.

Diesel isn’t the default choice anymore, either, and in fact the best engine in the Q3 lineup is probably the 150hp 1.5-litre TSI petrol, although in fairness you’re not going to choose that it battling hot hatches away from the lights is your bag. Handling is typically Audi - perhaps not inspiring in the manner of a Range Rover Evoque, but solid and satisfying. Which pretty much sums up the Q3 as a whole.

Lexus is really hitting its stride with its hybrid models, now that everyone hates diesel (apparently) and the UX250h is indicative of a company operating at the peak of its game. The compact UX mixes the familiar Lexus hybrid beats with a cleaner, slightly smoother version of the company’s spiky, hard-edged styling language. The interior, as we’re coming to expect from Lexus, is a thing of loveliness - all soft surfaces and smooth leather, even if the infotainment system remains doggedly behind the best of the opposition - but there’s a lack of space in the back seats and boot. One for the downsizers, then, rather than a well-heeled growing family. The new 2.0-litre hybrid engine (shared with the Toyota Corolla) doesn’t roar and whine as much under hard acceleration as was once the case, and while the UX isn’t going to win any handling championships, it’s arguably the most engaging of all of the current Lexus lineup to drive. Plus there’s the knowledge that it’ll be reliable enough to include in your estate when it’s passed onto your grandkids. That said, it’s worth remember that the UX shares most of its parts with the larger, more affordable, and more spacious Toyota RAV4, so do make sure you include that in your calculations.