Diesel, plugin-hybrid, V8 or hydrogen power? The GLC can cater to all whims 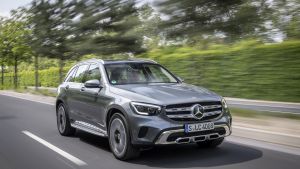 Mercedes-Benz GLC 300 4MATIC: There are new bumpers and lights, new grilles, some new colour options, and a revised interior with (optional) digital instruments and a bigger (also optional) touchscreen for the MBUX infotainment system.

Accelerating hard along the outside lane, we whip past the little white sign with the three diagonal slashes. In Ireland, such a sign would be all but meaningless. Here in Germany, just outside Frankfurt, it’s the ultimate symbol of motoring freedom.

No speed limit; you’re at your own risk, mein old chum. The big 4.0-litre, twin-turbo V8 growls deeply as it takes in big lungfuls of air, and continues to apply a hefty boot to the neck of the laws of physics. The GLC 63 AMG, all 510hp of it, flashes past all the usual big-number speeds before gently settling on 250km/h. It will go a little faster – 280km/h is the published maximum speed, once you’ve battered beyond 100km/h in just 3.8 second – but with a long curve to the right come up, 250 feels – preposterously – like a sensible speed.

The contrast with what we were doing 20 minutes prior to this could not have been greater. Still driving a Mercedes-Benz GLC medium-sized SUV, we were driving along the same stretch of Autobahn, but instead of the crackle of a mighty V8, there was instead the gentle hum of electric power. Not any old electric power, but the sound (if such a sound exists) of hydrogen being combined with oxygen to form water, with electricity as a byproduct. The F-Cell hydrogen-fuelled GLC felt just as impressive as the GLC 63 AMG, but in an entirely different manner.

Wait, we need to time-jump again. Back another little while, to the same stretch of road, sitting in much the same cabin, now enlivened by the presence of new, bigger digital screens for both infotainment and instrumentation. It’s still a GLC, but here there is motive noise again, from four cylinder bumping up and down to a diesel beat, as we sampled the updated GLC 300d. It’s the same car, but compared to the AMG it feels as if from a different planet. Compared to the F-Cell, it feels from another time, another universe.

That’s the thing with Mercedes, these days though. For a car company that, within easy-access memory, made a line-up of cars you could count on the fingers of two hands, the brand now makes everything from compact hatchbacks to a hybrid hypercar based on its Formula One engine package, and as-close-to-literally-as-makes-no-difference everything inbetween. The updated GLC range is that, in microcosm, spanning the gap from (relatively) affordable family bus to supercar-bother high-performance model, to space-age hydrogen power.

Being based on the same basic box of bits as the C-Class saloon and estate, it’s hardly surprising that the GLC is now due for an update, and equally hardly so that it gets basically the same changes as its lower-slung cousin. There are new bumpers and lights, new grilles, some new colour options, and a revised interior with (optional) digital instruments and a bigger (also optional) touchscreen for the MBUX infotainment system. It’s not as impressive to look at as the “digital plank” screens you’ll find in the A-Class and CLA, but the underlying software is basically the same, so it’s as impressive to use. If only it had a simpler rotary controller rather than the fiddly laptop-style trackpad, we’d call it easily the equal of BMW’s iDrive.

There’s a bigger change under the bonnet, where there is now, at last, the OM654 family of four-cylinder diesel engines. Diesel may be becoming unfashionable for many, but Mercedes (along with a large proportion of Mercedes buyers) still believes in it. Indeed, the official statement is that these engines – coupled with an AdBlue system for reducing emissions of nitrogen oxide – actually “underline the future viability of diesel engines”. Then again, Mercedes did sink €3 billion into developing these engines, so it would say that . . .

Then again – again – it’s a very good engine. We’ve only had a chance to try the most powerful 245hp 330d variant in the facelifted CLS So far, but Irish buyers will by the largest of margins favour the 163hp 200d or the 194hp 220d. The 300d impresses though, once it shrugs off cold-start clatters (even then it’s quieter than the old 2.1-litre engine). There’s oodles of power (500Nm of torque, too) and it swishes along in impressive silence, with impressive comfort, and displays impressive balance through corners.

It’s not very zeitgeisty, though, is it? Well, if you’ve tired of diesel, there will be a petrol-engined plugin hybrid model arriving before the end of this year, or a super-frugal plugin-hybrid diesel by this time next year – which may (or may not) be the ultimate case of having your diesel cake and still eating it in a low-emissions manner.

For the ultimate in low emissions, though, we must turn to the F-Cell hydrogen GLC. Clearly, this is a model that’s not coming to Ireland (well, unless and until the new Hydrogen Mobility Ireland consortium can get some H2 pumps installed at your local Circle K. ) but it’s a technically fascinating car. Not least because it’s also a plugin-hybrid, using the same battery as the petrol and diesel versions, giving you a roughly 50km range on a full charge. When charge is depleted, the hydrogen fuel cell takes over (it fits into the engine bay where the internal combustion engine would normally go) and will take you for a claimed further 400km. And when you run out, you just haul up to a hydrogen filling station (assuming you can find one) and two minutes later you’re on your way again.

Within itself, the F-Cell is mightily impressive. You’re aware of its extra weight relative to the more conventional cars in corners, and its performance isn’t as sparkling as you’d maybe like. But it is pleasantly brisk, and deeply refined, thanks to an acoustic windscreen and refinement lessons brought over from the EQC electric car.

Ah, but therein lies the rub. Why would you buy a hydrogen car, with all the (entirely valid) concerns about the lack of a refuelling infrastructure and questions over just how environmentally friendly commercial hydrogen production is, when you can have an electric car, the infrastructure for which is already expanding fast? Good question – even Mercedes doesn’t seem entirely sure, beyond a desire to keep a foot in the hydrogen camp just in case the tech ever really takes off.

The updated GLC will arrive in July, and thanks to the improved CO2 efficiency of the new diesel engines, and the adoption of a base two-wheel drive model, it will be more affordable than before, with prices starting from €48,000. The chop-top Coupe model will also be more affordable than before (take the regular car’s price and add about €3,000 model for model), and Mercedes Ireland reckons it will sell a much bigger mix of the “hunchback” model (which only really looks right when it’s gussied up with all the AMG bodykit addenda) than it used to. Diesel and petrol models will be available right from the get-go, while we’ll have to wait for the plugins, and don’t bother waiting for the F-Cell because it ain’t coming.

As an emblem of just how far Mercedes has flung its car-making net, the GLC is hard to beat. As a competitor in the premium SUV segment, it’s equally so. Enjoy it while it lasts, as probably within a decade, all of this variety will be gone and we’ll just have the all-electric EQC instead.

Make a move to Rialto: Dublin 8, but without the wave of gentrification
Real news has value SUBSCRIBE