Audi’s self-driving A8: drivers can watch YouTube or check emails at 60km/h 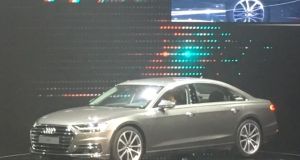 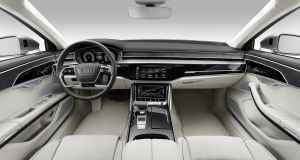 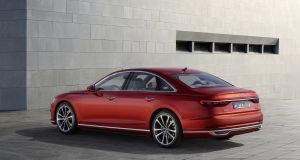 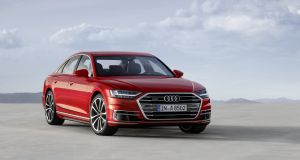 Audi claims its new A8 flagship saloon will be fully self-driving up to speeds of 60km/h, letting drivers take their hands off the wheel and do other things like check emails or watch videos. However, it will be several months before the new system will be able to be used by Irish motorists as authorities have yet to approve the system for use on European roads. The latest systems will also require significant amendments to road traffic legislation.

The new A8 boasts what is called “Level 3” autonomous driving. In comparison to the current systems on offer that still require drivers to be ready to take back control immediately, this level of self-driving technology has been billed as “no feet, hands or eyes”.

Activated using a new “Audi AI” button, the system offer fully autonomous driverless mode up to speeds of 60km/h. Billed by Audi as the “traffic jam pilot” it takes charge of driving in slow-moving traffic at up to 60 km/h on motorways where a physical barrier separates the two carriageways. With the car controlling, acceleration, braking and steering, Audi says the driver no longer needs to monitor the car permanently. The system allows the driver to take their hands off the steering wheel temporarily and - subject to national laws - do something else, like check emails. However, as soon as the system reaches its limits, it calls on the driver to take back control of the task of driving. And it depends on changes to the current legislation regarding not only driver engagement, but the laws regarding what drivers can get up to behind the wheel.

As well as the radar sensors, a front camera and the ultrasonic sensors, Audi is the first car manufacturer to also use a laser scanner.

The Audi AI system also offers remote parking, where the driver no longer needs to be in the vehicle while it parks up. Instead they can control the vehicle via their smartphone.

Aside from the latest self-driving technology, the new A8 is the first model in premium car brand’s line-up to feature the firm’s new hybrid architecture. While the majority of Irish sales will be either 3-litre 286bhp diesel or 3-litre 340bhp TFSI petrol, a 48-volt hybrid system will also support the car’s various fuel-saving features. Plug-in hybrid versions will also be offered along with electric-only variants in the near future, according to the car firm.

The new tech doesn’t end there. The A8 also boasts the most advanced active suspension system yet fitted to an Audi. The system uses a front-mounted camera to analyse the road ahead 18 times per second and adjusts the suspension according. Each wheel features an electric motor that adjusts the suspension with up to 811lb or torque. Audi claims the new system dramatically reduces body roll during cornering.

Suspension looks at the road ahead

In the event of an imminent crash, the suspension system also raises the side of the car due to be hit, aiming to ensure the point of impact will be at the strongest part of the car.

The new A8’s system also features electromechanical rear-axle steering. At speed it steers the rear wheels in the same direction as the front, or at low speeds in tight turning conditions, turns the wheels in the opposite direction, significantly reducing the turning circle.

With so much focus on the major technology features, the firm has opted to take a more conservative approach to its styling. The subtle changes carry over much from the outgoing A8, with the only significant difference occurring with the rear. Legroom at the back is up 28mm while headroom is up 14mm.

Audi is eager to retain its reputation for offering one of the best car interiors on the market, and the new A8 is plush, matching what’s on offer from arch-rival BMW in its new 7-Series. Most of the infotainment controls are operated by the driver via a sizeable 10.1-inch touchscreen. This is combined with a second 8.6-inch touchscreen display below it in the centre console. This second screen offers either a keyboard or the chance to write addresses or contact names using your finger. The car also offers the latest voice control features. The new touchscreens also feature haptic feedback with on-screen buttons giving the sense of a physical button when touched.

Of course, no premium flagship car would be complete without a few novelty tech features. For the A8, these include a foot massager for rear seat passengers.

The new car will go on sale in Ireland this autumn, going head-to-head with the latest BMW 7-Series and the new Mercedes-Benz S-Class, a new version of which is also due later this year. While prices have yet to be confirmed, don’t expect much change from €100,000 for the new car.

Even with the economic recovery, volumes are going to be small for Ireland, but it offers a signpost in terms of the new technology that’s on the way for future generations of more affordable Audis in the coming years. By that stage, hopefully the legislation will be in place to let future owners benefit from Audi’s latest self-driving systems.

“Level 1” is often described as “no feet”, meaning radar systems control the speed and braking of the car under the auspices of adaptive cruise control. This is already available on many new mainstream family cars.

“Level 2” is when some steering control is managed by the car’s electronics, such as in the case of lane keeping assistance or active steering where cameras track the direction of road lines. Again these systems have been fitted to many new family car models lately, with varying degrees of autonomy. At the most advanced - on the latest new Volvo, Mercedes and BMWs for example, the driver needs only to lightly keep in contact with the steering wheel at regular intervals. However, the fact that drivers must remain focussed and ready to intervene at any second means the systems have proved to be more of a gimmick than a useful feature for motorists.

“Level 3” can be described as “no feet, hands or eyes”. This is what Audi claims for its new A8. In select circumstances and conditions the driver will take no active involvement in the control of the car. However, like the previous level, the driver should be ready to intervene.

There has been a lot of debate about introducing Level 3, with Ford’s former chief technical officer, Raj Nair, saying his firm was foregoing this level as they fear drivers will be too distracted to re-engage and take back control quickly enough in an emergency. Instead they are hoping to move straight to Level 4, where the car is fully in control in most driving scenarios. The driver will only take control of the vehicle when, for example, the route involves an unmapped back road.

Finally, at “Level 5”, the vehicle will be fully autonomous with no engagement at any time from occupants. In these cars, there will not be either steering wheels or pedals fitted and occupants will merely enter their desired location and then sit back and leave the vehicle to manage the journey.