Are speed limiters taking driver safety a step too far? 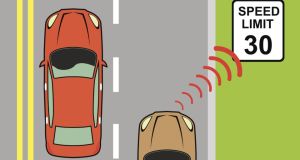 Both the Road Safety Authority (RSA) in Ireland and the European Transport Safety Council (ETSC) have called for the mandatory fitting of intelligent speed assistants (ISA) to all cars.

ISAs are just coming into production now, and Ford is among the leaders in the technology, which combines a camera (which reads the roadside speed limit signs) and the car’s electronic throttle. When a speed limit is detected, the car’s on-board computer systems will automatically halt acceleration when the limit is reached. It can only be bypassed by a determined shove on the throttle pedal.

Speaking about the technology at a conference held in Dublin Castle last month, RSA chairperson Liz O’Donnell said that “previous research based on preliminary Garda crash scene reports estimated that excessive speed was a factor in 15 per cent of fatal collisions. The report published today, using data from An Garda Síochána forensic investigation files, shows that excessive speed plays a more significant role in collisions on our roads, accounting for one in three fatal collisions analysed between 2008 and 2012.

“The faster you drive, the more likely you are to kill or seriously injure yourself or someone else if you are involved in a collision. Slow down – drive at a speed that is appropriate to the conditions and your experience, and remember a speed limit is not a target.”

According to the ETSC, a vast majority of drivers – 64 per cent, in fact – would support the fitting of such technology as standard to all cars. Prof Oliver Carsten of the Institute for Transport Studies at University of Leeds told the conference that “ISA has the potential to reduce collisions by 30 per cent and reduce deaths by 20 per cent”.

In a number of trials, ISA had a significant impact on driver speed choice, acceptance and intention to speed. Analysis shows that the stronger the form of ISA, the greater the impact it has on crash risk and crash severity, helping to reduce not only the number of collisions on our roads as a result of excessive speed, but also the severity.

It’s worth pointing out, however, that a survey by the AA showed that 49 per cent thought that mandatory limiters would be unacceptable, compared to 43 per cent who approved of them. A similar survey by Which? magazine showed that 66 per cent of respondents would not want an automatic speed limiter.

Garda chief supt Aidan Reid said that “excessive or inappropriate speed is the biggest killer on our roads. If you are driving too fast, your ability to react properly or safely to hazards is severely compromised. And if you are involved in a collision, the outcome could be tragic.

“There were 40,787 speeding detections in the first three months of this year. Speeding is not only illegal, it is dangerous and selfish. So please, think about the consequences of speeding the next time you get behind the wheel and reduce your speed accordingly.”

Doubts have been raised, however, over how useful the systems could be. Some reports have brought into question how much attention to road conditions drivers pay when using a speed limiter, while there are also potential issues with how quickly and accurately the systems recognise roadside signs.

Opel, for example, initially didn’t fit its Insignia model with road sign-reading cameras because Irish signage was considered too slapdash to get a consistent reading.

The AA has previously said that “it could take away people’s ability to get themselves out of trouble with a quick burst of speed, such as in overtaking situations where the capacity to accelerate can avoid a head-on collision.

“While the Ford system, for one, can be overridden by a sharp stab on the accelerator, it may be that not all drivers will react appropriately. A mandatory, ‘controlling’ system would be a step too far as the human element of judgment must always govern our safe driving. Perhaps the best answer is to allow time, and the market, to take its course as has happened with other in-car systems.”

Some have been more militant in their opposition. The Motorcycle Action Group (MAG), a UK-based group of bikers, has come out staunchly against ISAs. MAG president Ian Mutch said: “Let’s keep this one simple – we don’t want it, not today, not tomorrow, not ever. It’s not just about safety, it’s about what sort of society we want to live in. We don’t want to live in a society with the level of control which ISA can make possible.”

However, the RSA has brushed aside such concerns. Its communications officer Brian Farrell told The Irish Times: “In a recent study by the Transport Research Laboratory in the UK they concluded that of all the emerging safety-assist features ISA was the most cost-effective and had the greatest potential to save lives. This report has been presented to the EU Commission who are reviewing the current directive which will incorporate such safety assist technologies and make it mandatory for vehicles to be fitted with them. Of course, all the issues that you have mentioned will need to be addressed, but the best way for this to happen is for the EU to set down the parameters for all manufacturers to implement it across the EU. We are calling on the commission to mandate ISA technology as standard in vehicles . . . and to set a date for its implementation.”

The biggest issue of all, however, could simply be how long its takes new technology to filter through to the wider car market. According to the Insurance Institute for Highway Safety in the US, in 2012 91 per cent of new cars were equipped with electronic stability control as standard, but that translated to just 15 per cent of all cars on the road.

Limited appeal: A driver tries out a speed limiter

It may be a touch Orwellian (although as yet there is no suggestion that such systems can actually report on your behaviour behind the wheel) but there’s no doubt of the usefulness of an electronic speed limiter.

As an experiment, I spent a recent weekend driving a Jaguar XF fitted with a simpler, manual speed limiter, and trying as much as possible to make use of it.

The verdict? Hugely useful and a great aid to a driver trying to navigate a vehicle and placate bored children at the same time.

But it’s no panacea. There is no question, in my mind, that it breeds a false sense of security, certainly in the early days of using it, that you can just drive with your foot more or less flat down and forget about exactly how fast you’re going. Until you suddenly enter a tight corner way, way to fast and then your passengers begin yelling at you. At the very least.

The other, bigger issue, is other drivers. As has been pointed out many times in the past, any attempt to stick rigidly to a speed limit on almost any Irish road will cause more than a little havoc. Especially in 60km/h or 80km/h limits, your rear view mirror will in short order be filled with impatient grilles and angry faces.

Irish drivers are, by and large and pretty much without question, arrogant, careless and not interested in the good of their fellow man. Trying to drive at the posted limit in front of such people is a recipe for frustration, tailgating and aggressively stupid overtaking.

Until such times as all cars are fitted with electronic speed limiters, it may well be fruitless trying to fit any.

The Irish-American who led the last invasion of Britain
6

During lockdown I did not bake, teach myself anything or read a book
7