Airbus flying ‘car’ could take to the air this year

Prototypes and systems in development for personal aviation plans 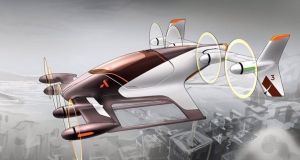 Whether its George Jetson’s flying car or Wile E Coyote’s Acme Industries jet pack, the concept of taking to the air just as easily as we take to the streets has been common science fiction currency since before the Wright brothers.

Relegated to the comic pages for decades, a confluence of technologies could now be poised to deliver the goods for real. There is a distinct possibility that we could soon be hailing an airborne taxi to whisk us from point-to-point, avoiding the crowded streets below.

Usually, such predictions would be the plans of a Silicon Valley start-up with more dreams than cash, or an eccentric with a shed full of power tools and a head full of unrealised hopes, but this is different – this is Airbus.

The vast European aircraft maker has done what was thought impossible before – twice. Back in the 1950s and 1960s, in the embryonic form of co-operation between the French and British aircraft industries, it created Concorde, still the only successful supersonic passenger aircraft, and a feat which many assumed could never be achieved.

Then, fully amalgamated and named Airbus, the European company set about another seemingly impossible task – eating into the near-monopoly then held by America’s Boeing in the passenger airline market. It succeeded there too, and today even major American airlines run Airbuses as part of their fleets, and numerous other worldwide carriers rely entirely on its products.

And now, Airbus wants to make a flying car. Well, sort of. This isn’t something, at least not yet, you can hop into and fly yourself.

The concepts on which Airbus is currently working are more like short-range, electrically powered helicopters, closer in form to a toy drone. With electrically-driven ducted fans, they could be quiet enough to hop across city centres, and Airbus claims they will be as cheap to use as a taxi, thanks to the savings that come with the ride-sharing culture.

Rodin Lyasoff is the chief executive of A3, Airbus’s advanced projects offshoot, working in Silicon Valley, an area beset with near chronic traffic jams. A3’s concept is called Vahana, and it’s an autonomous, self-flying system that can carry cargo or one or two passengers. “Many of the technologies needed, such as batteries, motors and avionics are most of the way there,” he told The Irish Times. “However, the aircraft also requires reliable sense-and-avoid technology. While this is just starting to be introduced in cars, no mature airborne solutions currently exist. That’s one of the bigger challenges we aim to resolve as early as possible.”

Nonetheless, Lyasoff is confident that before 2017 is out, a prototype autonomous airborne taxi will have taken to the air to begin trials. “In as little as 10 years, we could have products on the market that revolutionise urban travel for millions of people” he said.

That’s quite some turnaround for a project that only got started in February of last year but Airbus is working fast, convinced there is a solid business case for short-hop urban aviation. It’s already convinced the Singaporean authorities to let it test “Skyways” unmanned drones in the skies above the Asian mega-city, something no other urban authority has yet allowed, so that it can begin testing software and control systems to guide a pilot-less aircraft safely above the crowds of pedestrians below.

“No country in the world today allows drones without remote pilots to fly over cities – with or without passengers [but] if we really want to resolve this fundamental question, we have to demonstrate the system under real conditions. This view is shared by Singapore,” said Bruno Trabel from Airbus Helicopters.

It’s the Airbus helicopter division that is at the forefront of personal air transport development, perhaps because it has the most experience with things that hover. Its CityAirbus concept is, potentially, the closest to becoming reality because it sticks to the one piece of technology that’s the hardest to replicate – a trained, human pilot.

The CityAirbus would have multiple propellers and resemble a small drone. While initially it would be operated by a pilot to allow for quick entry into the market, it would switch over to full autonomous operations once regulations are in place, directly benefitting from Skyways and Vahana’s contribution.

Marius Bebesel, head of helicopter demonstrators at Airbus Helicopters says the feasibility study has been done and the results are more than encouraging. The sharing economy principle would make journeys in the CityAirbus affordable. A flight would cost nearly the equivalent of a normal taxi ride for each passenger, but would be faster, more environmentally sustainable and exciting. “A taxi ride through a new city is a nice experience as it is, but flying over that city would be much more thrilling,” says Bebesel.

Regulations and public acceptance are only the tips of very tricky icebergs around which the converging projects will have to navigate. However, Airbus points out that self-driving cars have the same or similar challenges, and that such cars are fast becoming commonplace. Airbus chief executive Tom Enders puts it succinctly; “I’m no big fan of Star Wars, but it’s not crazy to imagine that one day our big cities will have flying cars making their way along roads in the sky. In a not too distant future, we’ll use our smartphones to book a fully automated flying taxi that will land outside our front door – without any pilot.”