46: Toyota Prius – Still relevant at a time when hybrids are the norm

Top cars for 2020: Refined and relaxing to drive along with being spacious inside 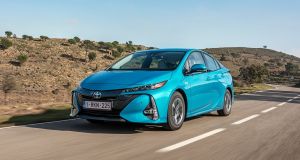 It’s not that the Prius isn’t still a very good car, it’s just that Toyota’s hybrid range has expanded so quickly, and impressively, that the original poster-boy for part-battery power has slipped down the rankings a little.

After all, when you can buy a much-more handsome Corolla with the same hybrid engine, what’s the point in buying a Prius? Yet, there is still a point to Prius and it’s the economy stupid (to coin a phrase).

While a Corolla Hybrid can pretty easily skip past the 50mpg mark in daily driving, a Prius, even driven without much overt care for economy, can easily best the 60mpg mark.

That oddball, fish-faced styling may not be as handsome as some of Toyota’s other models, but it’s hugely aerodynamically efficient and clearly pays dividends out on the open road.

And, indeed, at the fuel pumps. That the Prius is also very refined and hugely relaxing to drive is a bit of a bonus into the planet-saving bargain, and if the styling isn’t quite to your taste, well at least it more obviously advertises to the neighbours just what a good eco foot you’re putting forward. Plugin-hybrid version has temporarily disappeared from Irish price lists.