Matrimony has changed hugely in 70 years, and gay and lesbian couples are simply seeking what most couples now want: social recognition of their personal achievement 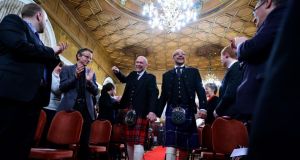 The No side in the forthcoming marriage-equality referendum argue that allowing gay couples to wed will fundamentally change the definition of marriage. The core of their argument is that it has always been defined as a legal bond between a man and a woman and that its uniqueness lies in the fact that only a man and a woman can produce children.

This definition therefore excludes the possibility of marriage between two people of the same gender. Opponents of marriage equality also point out that same-sex couples have most or all of the rights and protections of marriage in a civil partnership, and ask why they are demanding equality.

But marriage has always had a significance, as well as economic and social implications, that goes well beyond its narrow legal definition. So focusing on the definition ignores the dramatic evolution in the psychological and social meaning of marriage. And it is its meaning rather than its formal definition that most powerfully determines our thinking, expectations, behaviour and lived experience of marriage.

The campaign for marriage equality is not so much dramatically altering the meaning of marriage as reflecting changes that have already happened. In less than 70 years the way we understand marriage and its place in society has been transformed, even revolutionised.

Just think: until the 1950s marriage was the only socially acceptable way to enter a full adult family life. It was the gateway for couples to set up home together, to have (legitimate) sex and children, to provide economic protection for women and children, and to acquire the associated legal rights and obligations.

Now every element of that package has changed or is under challenge. How did such a sea change happen? Only by looking at marriage in this historical context can the demand for marriage equality for same-sex couples be properly understood.

Traditionally, what used to be called the institution of marriage was strictly defined: a legal bond between a man and a woman that was permanent, in which the husband was the undisputed head of the household and in which a strict division of labour was based on a trade-off between a woman’s dependence on a husband for income support and a man’s dependence on a woman for childbearing, childrearing and housekeeping.

The success of a marriage was largely defined by how well or badly those provider and homemaker roles were fulfilled. Love and affection, if spontaneously present, were a lucky bonus. Or couples simply hoped that love might grow gradually.

The first change happened in the 1950s, when marriage began to be understood less as a strictly defined social institution and more as a romantic and affectionate companionship. Husbands and wives now expected to be each other’s friends and lovers. Much more than in previous generations, the spouses’ emotional satisfaction was seen as an important part of a marriage.

But the rest of the package remained relatively unchanged. Traditional gender roles were still the norm. Marriage remained, in most countries, the only socially acceptable way to have legitimate sex and to have children – to get what one researcher called your ticket of admission to full family life. Even in the US, as recently as the 1950s, only 4 per cent of children were born outside marriage and only 5 per cent of couples cohabited.

The second big transition happened in the 1960s and 1970s, an era of rapid social change. The availability of contraception offered women the first real opportunity to control their fertility. Social pressure to conform weakened generally, and individual behaviour, particularly in the area of intimate relationships, came increasingly under personal rather than social control.

As a result, sex before marriage and cohabitation became more common and socially acceptable. Separation and divorce increased, and the stigma attached to them gradually lessened. Same-sex relationships became more visible but still faced significant discrimination.

Those changes continue apace. Today, in many western countries, including Ireland, a third of births occur outside marriage, rising to as much as 65 per cent in the Nordic countries. Cohabitation has become almost the norm before marriage.

During that era, and since, the women’s movement campaigned for more equality in work and marriage, with more equal sharing of the provider and childcare roles. As a consequence there is now much less social consensus about how men and women should perform their roles in marriage or intimate relationships. Couples need, and want, to make up the rules themselves by discussion, negotiation and experiment.

That this is a work in progress does not detract from its broader significance. What was once rigidly prescribed by society has now given way to what has been called more “private ordering” of marriage and relationships than ever before. Instead of strong social and religious norms about what partners could and should do, it is left to the couples to arrange between themselves.

How and when they sequence some or all of the elements of a long-term relationship – establishing intimacy, engaging in sex, having children, arranging how children are cared for, establishing an economic partnership, buying a home together and getting married – is now under individual rather than social control.

But for all the flux and change it is clear the priority for couples now is establishing a close and intimate relationship, characterised by open communication and a strong commitment to negotiate important issues.

Added to the expectation of love and friendship is the hope that the relationship will help both partners to express their innermost, deepest feelings, each helping the other to be his or her best self.

Relationships are increasingly judged as successful to the extent that they enable the partners to achieve that. Couples still derive satisfaction from how well they perform the roles of provider, homemaker and, where there are children, parent, but the emphasis now is less on formal roles and more on the quality of their intimate relationship and personal growth.

We are still in the middle of the third major transition – one that is particularly relevant to the current debate. Although the dominance of marriage as the only acceptable form of family has waned in many western countries, most people still expect to marry, and most do eventually marry.

This is despite the facts that cohabitation and single parenthood are increasingly more viable and accepted alternatives and that the legal distinctions between marriage and civil partnerships are disappearing – and have already disappeared in some countries.

The best thinking among family scholars and researchers is that marriage has become the most prestigious type of couple relationship in a very particular sense: not as a sign of social conformity but as a public affirmation and celebration of what the couple has achieved: a committed intimate relationship, personal maturity, a household, a given level of career and financial security.

Even when fully committed to each other and already parents, couples may delay or be forced to delay marriage until their finances and careers are stable.

Marriage, says one leading researcher, used to be the foundation stone of adult life. Now it’s the capstone. In other words marriage is a status that most couples aspire to and build up to, something that they have achieved by their own efforts.

Gay and lesbian couples are simply seeking what every other couple wants: a social recognition in marriage of their personal achievement and effort. It is an acknowledgment of the couple’s new status that marriage confers.

The mystery is why those who say they value marriage so highly aren’t cheering.