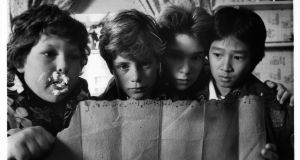 I don’t remember too many details from my very early childhood, but I do remember that the television was humming away in the background for almost all of them. I’m astounded at how readily I can recall, word-for-word, the scripts of films such as The Goonies, Oliver! or Santa Claus: The Movie. I know all the lyrics to Jamie & The Magic Torch, Why Don’t You, and Button Moon even though I’ve heard none of them for 30 years. Those nostalgic clips that occasionally surface on social media transport me back to a time when we were plonked in front of some fairly questionable TV.

Looking in the rear-view mirror, some of the most famous TV shows of the 1980s were probably a bit inappropriate for small children. But the off-colour jokes went over my head. I see now Worzel Gummidge was truly bizarre. Terrahawks? Terrifying. Watership Down? Yikes.

What are those parents without televisions and wifi doing now that everyone – or at least many people – are spending 23 hours a day (or more) in their homes?

And yet there we were, plonked in front of this huge walnut and grey monster-box for hours on end. Some mornings, the only exercise we got was plodding to the telly to change channels. I know now that my mother was on to something. Once the telly crackled to life, we temporarily abandoned our usual WWF-grade scrapping for the quiet appreciation of BraveStarr or She-Ra. The ad breaks would snap us out of our reverie, and we’d screech that we wanted Mr Frosty, Guess Who or whatever other toy was being advertised, in between clotheslining each other and chokeslams.

No one was accused of iffy parenting in the 1980s or ’90s if their children had enjoyed more than a glut of kids’ TV. Now, of course, parents are aware of the guidelines around screen-time for little ones (and this, alas, includes TV). Babies younger than 18 months should have no screen-time at all, according to experts. “We don’t even have a TV!” some parents sniff. That’s all fine – you stick with your baby Latin and your toddler palaeontology, and leave me to Iggle Piggle.

What are those parents without televisions and wifi doing now that everyone – or at least many people – are spending 23 hours a day (or more) in their homes?

I’m only a tiny bit ashamed to say it, but my 13-month-old loves a bit of CBeebies. Many of our mornings start with some singing to Teletubbies, and our evenings end with In The Night Garden, with its sonorous bed-time refrain. The baby claps her hands in recognition of the songs, and waves to the characters. A cuddle and CBeebies has become part of our little daily routine. It also means I can make an escape, prepare breakfast, use the loo or wash my face without tiny hands clawing at my ankles.

Some see it as a cop-out; television is not meant to be a babysitter. But once we offset the Teletubbies with some fresh air, walks and face-time, what’s the harm? Isola gets plenty of attention and affection in real life. She is more inclined to point to a book that she wants to be read to her than the remote control. Yet the question deserves to be asked: is there such a thing as a “good” TV show for kids?

Angela Santomero has created popular TV shows such as Daniel Tiger’s Neighbourhood and Super Why, and in her book: Pre-School Clues: Raising Smart, Inspired and Engaged Kids in a Screen-Filled World, she notes that a successful children’s show has a number of different qualities including education, interaction and engagement.

Certainly, some broadcasters make a decent fist of balancing all three. Many of today’s TV shows highlight socio-emotional learning in a way that, say, He-Man didn’t. Emotional learning is another biggie, as is visual representation. CBeebies’ show Something Special, for instance, is signed with Makaton sign language, and features children with additional needs playing games with Mr Tumble. Another, Biggleton, is cast with child actors of all races, heights and abilities. I love that these shows – with equality and diversity baked into the premise – exist. I can’t help but wonder what it might have been like to have such positive visual messages in my own childhood.

Within most of these shows, being good, kind loving and generous are messages that run throughout.

On Yo Gabba Gabba (currently showing at an ungodly hour on Virgin Media Three), the characters sing catchy songs about not biting your friends, waiting your turn and allowing broccoli to “join the party in your tummy”. As a bonus for parents like me, music artists such as The Shins, Solange, Devo and Ladytron appear as part of Yo Gabba Gabba’s Super Music Friends Show.

Perhaps my 13-month-old is too young to appreciate these positives, but I’m not overly worried about it. She’s an alert, curious and socially agile kid.

Whether that’s our doing, or Iggle Piggle’s, remains anyone’s guess. But parenting brings enough guilt with it to begin with.

On this point about whether children’s TV is “good” or “bad”?

I’m giving myself a hard pass.

School closure might be a dream for some children, but it is a nightmare for others
5