Ireland’s Eye: 15 minutes from Howth, but it could be on a different planet

The Trip: It is less than a mile off the coast of north Dublin, yet Ireland’s Eye is very remote, atmospheric and great for spotting wildlife. It is also home to a – gulp – murder cave 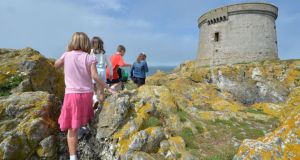 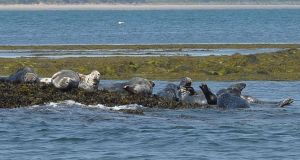 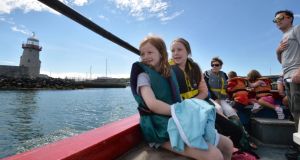 Grace (7) and Ellen (10) with their mother, Pauline O’Shea, on board the boat from Howth. Photograph: Alan Betson

‘Is this England?” asks a little girl as she steps unsteadily from the fishing boat on to Ireland’s Eye. The peals of laughter from her fellow travellers cause her lip to tremble slightly, but we may as well be on the moon right now, as a thick sea fog has swept in over the course of the 15-minute crossing and Dublin has completely disappeared.

Before the tears can come, she is distracted by the mystery island shrouded in mist. She and the other children climb up the rocks used as steps at its main docking station with all the agility of mountain goats, while their parents and guardians follow slowly behind with the agility of adults all too aware of the fragility of their hips.

We are being deposited here by Ken Doyle, who runs an hourly ferry over and back to the island less than a mile off the north Dublin coast throughout the summer. This journey is in his blood. He captained his first boat when he was just 12, more than four decades ago. A gap of nearly 40 years followed, in which he took some time out to work as an accountant with the ESB. He returned to the boat after taking early retirement.

“We’re kept going this summer for sure, but it’s a different story when the weather is bad,” he says. “When I was a child on the boats it was a different time. We didn’t have to wear life jackets or anything. I was lucky though: the first and only time I fell into water was in the pond in Stephen’s Green.”

The first passengers arrive at the pier, three children being shepherded by Pauline O’Shea. She has lived in Howth for more than seven years, but today is the first time she will make it out to the island.

“I’ve looked out on it for all that time and always wanted to see it. I reckon it’s a nice thing to do,” she says. She is the mother of Grace (7) and Ellen (10). Their friend Caitlin (10) has also come along.

Next on to the boat is Brendan Lowe. On a whim, he strolls up to the pier and asks how much the trip will cost him. After a brief haggle, he gets a discount for his children Ian (8) and Laura (6) and their cousins Aoife (7) and Emily (11).

Like Pauline, he is a first-timer. “I grew up in Sutton but I’ve never been out to Ireland’s Eye,” he says, somewhat shamefaced. “One of the things I love about coming home for the holidays is that you don’t have to queue up for anything or make plans in advance. In Spain everyone goes on holidays in July and August, and things can get a bit stressful there. Here it is way more relaxed.”

Brendan has been working in Madrid for the last 15 years. “We are land-locked, so the kids love to see the sea,” he says as they look out over the docks with a mixture of fear and excitement in their eyes.

He asks Ken if there is moonshine on board. “Ah no, I’m not that efficient,” the captain says. No moonshine, but the first 10 minutes of the trip are bathed in sunshine, and, as we round the island, puffins and gannets puff out their chests, while seagulls lose the run of themselves.

“Oh look, seals,” squeals Laura. Everyone’s head turns. Sure enough there is a family of seals basking in the sun just feet away. Some splash into the water and make for a nearby boat that is throwing fish into the sea. Seal envy breaks out on our boat until we round the island and get ready to dock.

Like the seals we have just left behind, Pauline is basking in the sun. “I am beginning to think Ireland is a great place to go on holidays,” she says. “Even without the weather it has a whole lot going for it.”

She and Brendan talk about the price of the trip – €5 for kids and €10 for adults. “We were in Portugal a couple of weeks ago and we took a boat out to see dolphins,” she tells him. “It was just a mile out to sea, and the journey lasted no more than 15 minutes, but it cost us €130. This is just as nice.”

We pass what looks to be a shallow cave. It was once a shallow grave. “That’s where the murder took place,” says Doyle.

In 1852 William Kirwan, an artist and a gentleman, came to Howth on holiday with his wife, Sarah. They were rowed out to the island by a local boatman. He planned to do some painting, while she was going to soak up rays. As the sun set, the boatmen returned to collect them. Sarah was missing. Her body was later found washed up on rocks at a place known as the “long hole”, the place we have just passed.

Kirwan said she had drowned, but was charged and convicted of her murder and sentenced to death. The evidence was largely circumstantial. Kirwan had been in dispute with locals over unpaid bills, and was having an affair with a woman in the city. His sentence was subsequently commuted to a life term and he served 27 years of hard labour before setting off to America to meet the “other woman”.

“My family got a mention at the murder trial,” says Ken with some pride. “The court heard that the only other boat to come out on the day she was killed was captained by the Doyles – my family. They would have been rowing out back then. All the people we took out were accounted for, which meant it had to be him.”

When we are all safely deposited on the island, he leaves us to our own devices. We wander around aimlessly. Apart for an old Martello tower, there is nothing here save for birds, butterflies and ladybirds – hundreds of ladybirds.

There are no steps and there is no interpretive centre to blight the landscape. The only sound is the cry of curlews and the squawking of seagulls as we stomp close to their nests, where their young are presumably being schooled in the dark art of snaffling sandwiches from unsuspecting pedestrians on Grafton Street.

One of Brendan’s party squeals at the site of jellyfish. Then she rejoins her brother and cousins as they hurl little stones against the great rocks on the seashore.

He sighs. “It’s hard to get your bearings with all the mist, isn’t it?” he says, looking out at the bank of thick cloud that has suddenly enveloped the island.

Time passes pleasantly enough. As we prepare to return to the shore, Ellen describes the trip to the Eye as “awesome”.

Brendan says it is “brilliant” and says the only thing he is missing “is any knowledge of the flora and fauna on the island. That would make it better, but maybe I should have done my homework before coming out. I love the whole disconnect with Howth. It is just 15 minutes away and we may as well be on a different planet.”

Ate: Beshoff fish and chips on the yellowing grass overlooking the boats shimmering in the dock, and a 99 on the pier. Life does not get much better than this.

Saw: As Ken Doyle said, there are people who travel miles along the wild Atlantic coast to catch sight of a gannet, when there are thousands of them perched on the craggy rocks on Ireland’s Eye.

Loved: Such remoteness so close to the urban sprawl of north Dublin is a thing of wonder.

Hated: The morons who left a huge pile of Dairylea wrappers in a mound on the island. Seriously, why would anyone do that?

Would I do it again: In a heartbeat. In fact I will do it again before the summer is out.

Sealing the deal: how to buy a house at the right price
5