The Technological University Bill has sparked debate about what Institutes of Technology are, what they may become, and how this could affect the third-level sector 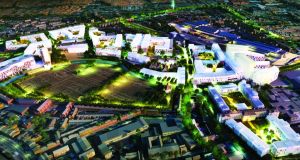 Future campus: one proposal is for DIT to merge with IT Tallaght and IT Blanchardstown. It is planned for Grangegorman (above)

The prospect of re-designating institutes of technology as technological universities has stirred a sense of deja vu among some academics. Ireland’s higher-education sector has a history of branding issues.

In the 1970s the National Institutes for Higher Education (NIHE) were presented as a new type of college, pitched above the regional technical colleges but more industry-focused than universities.

In the 1980s an international panel considered whether the NIHEs in Dublin and Limerick could form “a new technological university” only to suggest they remain distinct, paving the way for them to become Dublin City University and the University of Limerick.

The issue resurfaced in the 1990s, when regional technical colleges pushed to become institutes of technology and, subsequently, with unsuccessful attempts by Dublin Institute of Technology and Waterford IT to attain university status.

So what’s different this time? Minister for Education and Skills Ruairí Quinn recently announced the legislative underpinning for institutes of technology to merge to become technological universities, subject to strict criteria and approval by an international advisory panel.

Technological-university status is distinct from that of a university and must remain so, as the 2011 “Hunt report”, or National Strategy for Higher Education to 2030 , states. This is to safeguard the mission and ethos of institutes of technology.

This distinction is in place, some feel, to avoid compromising the interests of existing universities and to avoid the troubled transition polytechnics faced in the UK after being granted university status, in 1992.

But the Technological University Bill has also reignited interest in what institutes of technology are, what they may become and what effect they may have elsewhere in the sector.

Ireland has 14 institutes of technology, with a variety of identities. They were originally developed as further- and higher-education colleges to support industrial development, but today they cover various disciplines right up to university level.

“For a start they offer a ladder of opportunity,” says Prof Brian Norton, president of DIT. “You’ve got a different range of courses and levels that enable people to reach their full potential, whether they’re late developers or mature students. You’ve also got a more practice-based provision where people are actually learning to do something as well as understanding its context.”

Fundamentally, he adds, institutes of technology are more career-oriented in that students have a vocational path in mind from the outset, whereas a university often offers a broader process of intellectual development.

It’s no coincidence that multinationals in Ireland are closely clustered around the institutes of technology, says Paul Hannigan, president of the Letterkenny IT and chairman of Institutes of Technology Ireland.

“There have been a lot of developments over a relatively short period of time, but the institutes have gone from strength to strength, and they are contributing hugely to regional development. Even in the context of the current recessionary times, the institutes have continued to take in additional students.”


Less research, more dropping out?
Criticism of the institutes has included the low ratio of PhDs among full-time staff (24 per cent held doctorates in 2010-11), lower research and retention rates (first-year students are up to three times more likely to drop out than those at universities, according to the Higher Education Authority).

The counterarguments are that apprentice training leads to a lower staff profile of PhDs, that poor progression rates are attributed to shortcomings in the CAO system and that teaching duties at institutes far exceed those at universities, leaving little time for research.

But it remains unclear how institutes of technology, and the higher-education sector at large, will improve by amalgamating facilities.

The proposed mergers are: Dublin IT, IT Tallaght and IT Blanchardstown; Cork IT and IT Tralee; Waterford IT and Carlow IT.

That DIT is the only institute to confer its own degrees up to university level and already has a significant stature “looks a little odd, internationally”, says Norton.

Some argue that merging with weaker institutions is unlikely to improve its profile – one academic likened it to combing Everton and Fulham football clubs and expecting to get Barcelona – and that smaller institutions could struggle to integrate with an organisation of DIT’s size.


Branding issue
Norton doesn’t believe either to be the case, citing the merits of building on other institutes’ strengths and traditions. He points out that DIT has already successfully amalgamated several organisations. But he does acknowledge a branding issue: having the title of “university” makes a difference when attracting international students and overseas funding.

“One of the agendas is to seek consolidation. You could argue that for a small country to have so many higher-education institutions is not really the best way of organising things. If you brought them together there’d be more resources at the coalface.”

In the case of Waterford IT the issue of consolidation is so thorny that staff have been asked not to speak publicly on the issue. “The two-tier system of universities and institutes has served Ireland very well,” says one WIT staff member. “But the case of WIT is complex, because the lack of a university has cost Waterford city and the southeast region dear in terms of the brain drain of students and industry to other cities. The upgrading of Waterford Regional Technical College to institute-of-technology status was an important advance in 1997, but this was effectively cancelled by a similar upgrading of all other RTCs shortly afterwards.”

Since then, the staff member adds, there has been an ongoing campaign by Waterford city for full university status.

“The problem is that this sort of genuine upgrade is costly, ie it involves the recruitment of new staff, a reduction in the intense teaching loads of lecturers, and investment in office facilities conducive to research. It’s not clear whether the current proposal of ‘technological universities’ will involve this sort of upgrade.”

Dr Greg Foley, author of The Education Conundrum and a lecturer in biotechnology at DCU for more than 25 years, likens the Government’s proposal to rearranging the deckchairs on the Titanic .

“It isn’t going to change anything in terms of the quality of education,” he says. “What’s happening with this revamp of the system is the classic Irish approach to how we do things: the Minister is going to present what he’s doing as some sort of transformational event that’s going to reshape education. In fact what he’s doing is tinkering with structures the same way we did with the health service to create the HSE.”

Foley believes the technological-university concept not only ignores the fact that Ireland has one of the highest third-level participation rates in Europe, and therefore leaves little scope for expanding the sector, but also overlooks the industry links that Ireland’s universities have been developing.

“The idea that universities are just sitting back in these ivory towers is a source of contention among staff,” he says. “Really, universities are doing what it’s claimed technological universities are going to do, and they’ve been doing it for a decade and a half at least. In that sense I don’t think the Minister has really thought this through.”