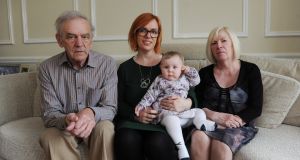 Lorraine Carthy with her daughter Tess aged 9 months and her parents Aidan and Phylis Carthy, in their home in Sandyford, Dublin. Photograph: Aidan Crawley

Time once was that a thirtysomething still living in the family home was viewed with suspicion. That they were dragging their heels; hesitant for any number of reasons to get on with adulthood. And in Ireland, it’s a sentiment that has stubbornly endured: you’re not really a grown up until you’ve been kicked out of the nest, forced to fend for yourself and wash your own clothes.

Yet rising rents and property prices have forced us into a rethink. It’s no longer the preserve of the fiscally unsuccessful, or the adult who has somehow lost his way. For some, it’s the only affordable living solution. And for the upwardly mobile that have designs on buying their own place, living at home offers a welcome financial breather.

But is there much breathing space involved when you’re living under the same roof as your parents, and old adult-child dynamics are likely to resurface?

According to 2016 figures from Eurostat, 22.6 per cent of 25-34year-olds in Ireland are living at home. Comparatively, the UK is at 14.4 per cent. The Scandinavians, meanwhile, have the lowest rate of young adults staying in their family home with just 1.8 per cent of Danes living with parents, 4.2 per cent of Norwegians, 4.1 per cent of Swedes and 4.0 per cent of Finns.

Kate McEvoy, 34, a producer at a video content company, recently bought her first house in Crumlin. Yet she acknowledges that a spell living at home helped to fast-track her dream. She explains

I would be one of the first of my friends to buy but a few others have started on that road, including my best mate, who has just moved back to her family home just down the road from me as she goes through a similar process,”

McEvoy moved home in September 2016 to the family home in Ballsbridge, after being a renter for nine years.

“My lovely former landlady gave me notice back in April last year that she wanted to move back into the property,” she says. “Prior to that I’d been thinking about buying a house in a vague sort of maybe-some-day way, but then I looked around and realised just how bad the rental situation in Dublin had gotten, buying was the better fiscal option for me, if I could make it happen.

“Living at home has been largely a really positive experience,” she adds. “There have been occasional disagreements, but my parents are my favourite people and have been incredibly supportive during the house hunt. I’d forgotten what it’s like to have someone who will include you in dinner or throw on a wash for you when you’re having a busy week and I’m definitely going to miss that when I move out again.

“I don’t think it was too much of a culture shock really as even when I lived at home in college, we always had a lot of freedom,” Kate adds. “It’s always been an environment based on mutual respect so that’s just continued. I would have visited a lot so it wasn’t like I was completely out of the loop when I was living out.

Even while living at home, McEvoy says her social life carried on as normal.

“Growing up our house was always a really welcoming place, so we know that our friends and boyfriends are always welcome,” she says.

My parents both have an incredible appetite for new things whether it be a new restaurant, a gig or an exhibition, plus I’ve taught them how to use Netflix so I do have my uses.

If they feel I’ve contributed a fraction of what they’ve done for me then I’d be very happy. I’ve loved having this time together and it’s really helped me prep for this next chapter in every way.”

Within five months, McEvoy had made considerable savings, to the tune of roughly €7,000.

“I was already saving at least €300 a month but not paying rent & bills definitely kicked my savings onto another level, and that was very much the agreement when I moved back . . . to save as much as quickly as possible,” she notes.

Down in Sandyford, meanwhile, hair stylist Lorraine Carthy, 32, has moved home last November with her partner and 9-month-old daughter, Tess.

“We were looking to buy property in Dublin, but we honestly couldn’t afford it,” she explains. “So now we’re hoping to save for longer. We were in an apartment in the Beacon complex and had a really good deal, but now that the prices have increased so much, it’s impossible to rent and save.”

Returning home, with babe in arms was certainly, Carthy admits, a “real transition”: “It took me a while to settle back in, especially when you’re so used to having your own space,” she says. “I’m breastfeeding Tess, so I had to remember to put clothes to go elsewhere in the house. She’s also up every two hours during the night, so I feel I need to tend to her more quickly than if I was in my own place, to keep the noise down.

We’ve gone from having a whole apartment to being in one room with a baby.

We do have our own sitting room area and my parents are really amazing about it all. But I think I’d have found it difficult to move in with anyone after living as a couple for so long.”

Sure enough, dynamics of old started to reappear, and the new mum has enjoyed being mothered.

It’s funny when you’re used to doing your own shopping, bills and cleaning to coming home and seeing your freshly washed clothes out on the line,”

she smiles. “I’d also had to get used to getting that phonecall again: ‘are you going to be home for your dinner?’ It’s brilliant, but I did feel like I was 16 again. And when I was 16 I was hell-bent on being independent.”

Carthy’s mother, Phyllis, was delighted to welcome her youngest of five children back into the family home: “When she left home, I kind of missed a good bit of her progression in her late teens. Lorraine went travelling for a while and I missed her terribly. It’s great getting to know her again.”

Central to their ongoing harmony, Phyllis says, is space: “She’s great at clearing up after herself, and she and her partner tend to cook for themselves a lot, as does her brother Robert (32) who is also saving for his own house,” she says. “I’m lucky in that I have an extension, which I built when they were younger and needed somewhere to bring their friends. I don’t know how we would all cope if we were sitting in the one room, watching the one television. I’d absolutely have taken them back in even if we didn’t have that space, but it does make things a little easier.”

Most of Carthy’s peers, in a similar financial position, have opted for a similar strategy in a bid to get on the property ladder.

“It’s great that many of the friends I grew up with are back living around me,” she says. “Most people are really positive about the idea now. No-one has a choice; if you want to buy, the only real choice is to live with your family for a year.”

One of Phyllis’ main gripes is a financial system that appears to work against youngsters that are working hard and attempting to save: “I’ll tell you what annoys me,” she says. “Why can’t banks see that someone has been saving for the past three years, or meeting rent payments regularly, and just give them the damn mortgage? The bottom line, too, is that the houses aren’t there to buy.”

Both Carthy and McEvoy have found the experience of living back at home a positive one, but according to family & relationship psychotherapist Trish Murphy, familial harmony among adults isn’t necessarily a foregone conclusion.

“There are the obvious issues, like being a child again in your parents house, and the difficulty of everything fitting in and getting on with each other again,” she observes.

Then you have sex and intimacy . . . add your parents next door into the mix, and it can be a difficult thing.

“All you have to do is see what’s it’s like for families at Christmas – for two days everyone is on their best behaviour before the children are lying around the house.

“It’s great that parents are being that generous, but it’s hard, and whatever tensions that are under the surface are likely to bubble up and over.

“First and foremost, it’s necessarily to sit down and ask each other, how will we cope with this?’ There has to be ground rules, plans, rotas and ways of dealing when someone is cranky and upset. Without those discussions, those childhood behaviours will surface, and that will cause problems. Most Irish families don’t want to have to do that, but meeting once a week for a half-hour review will save plenty of headaches.”

And even for those hoping to save plenty, a nominal fee towards housekeeping will also help to stoke the fires of domestic harmony.

“Some parents don’t need the money, certainly, but at the same time it’s hard not to feel used,” says Murphy. “Some parents will refuse it, but it’s something that both parties should give serious consideration to. It will also help the child feel like they have more rights.”

Irish conductor the first woman to lead orchestra at Oscars
9