What sold for just over €1m in Killiney, Rathgar, Sandymount and Blackrock 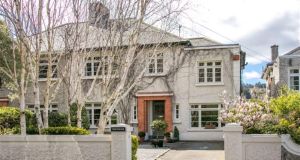