Thrills and frills of the poppy season

Difficult to grow and short to flower, the poppy is worth the effort 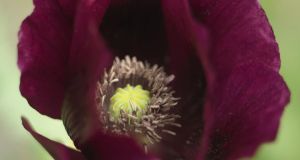 Don’t you just love it when things go right in the garden? When, for example, seedlings come up just as you’d hoped – pristine and in perfectly spaced rows rather than patchy and slug-eaten – or a carefully-planned plant combination turns out to be just what you’d dreamed it would be? As gardeners, we’re all familiar with the occasional bitter taste of failure; apart from teaching us a salutary life-lesson, it makes our horticultural successes seem all the sweeter. In which case, forget any displays of false modesty; mental back-slapping and smug self-congratulation is instead perfectly in order. Or at least that’s what I told myself last week, as I gazed at the giant, silky petals of the poppy known as ‘Lauren’s Grape’ flowering en-masse in my garden.

‘Lauren’s Grape’ is a variety of Papaver somniferum, the opium poppy whose cultivation is technically illegal in many countries (including Ireland, unless licenced to do so) because it’s the source of opium used in drugs such as morphine and heroin. It’s the flower in The Wizard of Oz that the Wicked Witch of the West uses to drug Dorothy and her friends, its spicy scent supposedly sedating them as they walk though a meadow filled with its colourful blooms.

It’s also the flower whose labour-intensive cultivation provides so many Afghan farmers with a livelihood; as much as 90 per cent of the world’s opium is grown in Afghanistan, illegally but at great profit for some. It’s the flower, in short, that is the cause of so much human grief, pain and misery. And it’s beautiful.

A fast-growing hardy annual that likes full sun and a well-drained soil, the opium poppy’s flowers may be single or double, and vary greatly in colour. In the wild, they’re typically pale lilac with a sooty black mark at the base of each petal, but you can buy seed of different cultivated forms with flowers in shades of white, pink, red or purple, some so dark that they appear almost black.

Plum-purple ‘Lauren’s Grape’ is one of the darker forms, but other notable varieties include the frilly double ‘Blackcurrant Fizz’, ‘Cherry Glow’ (scarlet and black), ‘Black Peony’ (double, deep purple) and ‘Giganteum’ (especially large seedheads). While the flowers are typically short-lived in a vase, there’s even a new long-lasting variety that’s suitable as a cut-flower crop (‘Candy Floss’– pale-pink, double).

A tall, tap-rooted plant, according to conventional gardening wisdom, the opium poppy should be grown from seed direct-sown in spring (to flower that summer) or in late summer (to flower the following year), as it hates root disturbance. Sometimes, however, it pays to ignore conventional gardening wisdom. And so this spring I sowed seed of ‘Lauren’s Grape’ under cover in the glasshouse into extra-deep small pots known as rootrainers, carefully transplanting the seedlings into their final positions in May with the aid of a garden dibber, before watering them generously.

Rather than sulking, as all of the text-books had so ominously warned me, the seedlings took off, forming large rosettes of silver-grey leaves from which stiff flower stems began to slowly rise in mid-summer. For weeks I watched those bent flower heads swell, waiting to glimpse the first glimmer of colour. And then one morning early last week – pop – it happened. The first golden-eyed flower opened overnight, unfurling its shimmering, deep-purple petals. By the time I spotted it, its stem was already dancing beneath the weight of a hungry bumblebee plundering it for nectar and pollen.

Reaching an average height of 60-90cm, the flowers of Papaver ‘Lauren’s Grape’ are now a glorious addition to the late summer garden, where I’m growing them as part of a riotous mixture of richly coloured annuals and late-flowering perennials including pot marigolds, the dusky red-orange Tagetes ‘Cinnabar’, Cosmos ‘Click Cranberries’, and various dahlias in shades of plum, tangerine and raspberry.

But even after every one of those large exquisite flowers has faded and every satin-smooth purple petal has dropped to the ground, the poppy’s statuesque seed-heads, each with its elegantly frilled cap, will remain as a decorative element well into late autumn.

These can also be harvested and used in floral decorations (either fresh or dried). Alternatively you can use the tiny, protein-rich seeds (either raw or toasted ) for culinary purposes, as a flavouring in cakes, breads, pastries, even fruit salads. And don’t worry about any possible narcotic side effects; unlike other parts of the plant, the opium poppy’s seeds contain no narcotic alkaloids and are safe to eat, being a good source of lecithin. In fact, Ireland’s cool climate greatly reduces the poppy’s ability to produce such alkaloids in any quantity in any parts of the plant.

Once grown, Papaver somniferum has a delightful habit of seeding itself about the place. If you haven’t grown it before, late August is a good time to sow seed for strong, vigorous plants that will flower that bit earlier next year. All of the gardening books will tell you to direct-sow shallowly into weed-free soil in a sunny spot, making sure to carefully protect the emerging seedling from slugs and snails. But, then again, the books aren’t always right . . .

Sinéad Burke: It’s never too early for children to learn to be curious and kind
7

I can hear the old dear’s hysterical voice going, ‘Better men than you have eaten my one-pot stews!’
8

Paul Flynn: Three delicious dishes you can bank on this weekend
9