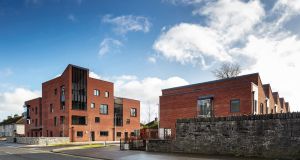 Tooting Meadow, in Drogheda, designed by McKevitt King, has won first prize in the Royal Institute of the Architects of Ireland’s 2020 public-choice award

A social housing development for families and elderly people in Drogheda, Co Louth, has won the Royal Institute of the Architects of Ireland’s 2020 public-choice award.

Designed by the Drogheda-based architecture practice McKevitt King on the site of a former fire station, the Tooting Meadow social-housing development consists of 15 homes and was commissioned by North & East Housing Association.

It is located on Scarlet Street and is named after Tooting Tower, which formed part of the nearby walls of Drogheda.

The president of the RIAI, Ciaran O’Connor, describes the development as “the perfect example” of high-quality housing that “addresses the country’s changing demographics while also creating sustainable neighbourhoods in our towns and villages”. Tooting Meadow “transformed a derelict site in the town centre into a mixed-unit development with community at its core.”

Tooting Meadow was one of 33 projects completed in 2019 and designed by RIAI-registered architects to be shortlisted for the public-choice award.

Buildings across Ireland and abroad were shortlisted for the award, with projects in Cork, Dublin, Galway, Tyrone, London and France considered for the prize.

The RIAI says the public-choice award helps to build awareness of the “important role that architecture plays in delivering Ireland’s societal and economic infrastructure”.

The RIAI awards architecture prizes across a range of categories, including sustainability, cultural/public buildings, learning environments, public spaces, urban design and innovation. The full list of award winners will be announced in the autumn.