With the banks lending and normal buyers returning to the market, what are the emerging trends? 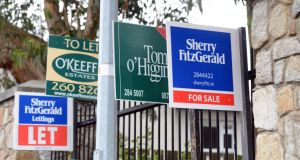 Mortgage lending may be in the early days of recovery, but there has been a move away from cash buyers propping up activity levels. Photograph: Cyril Byrne

As the autumn selling season revs into gear, buyers and vendors are starting to come out of the woodwork. Rising prices mean that vendors who have waited on the sidelines until the price was right to sell are now considering taking the plunge, while purchasers who lacked the confidence – or the funds – to take that step onto the property ladder are now thinking of doing so. But what are the trends you should be aware of before you get moving this autumn?

Lack of supply is repeatedly blamed for many of the recent price hikes. There may be one potential silver lining to these hikes for purchasers in that the bidding wars that characterised the past year or so in particular parts of the country, and particularly Dublin, are likely to dissipate.

Dublin agent Owen Reilly concedes that agents may have priced properties too low in previous months, which resulted in properties attracting multiple bidders, pushing prices up and frustrating the disappointed bidders.

Now, agents believe that prices are pitched at a more “appropriate level”.

“Now when we go out to value a house, we factor in such house price inflation, and add another little bit again, to allow for future inflation over the next two/three months,” says Simon Ensor, director of Sherry Fitzgerald Residential.

This means that where once five bidders might have chased a house, you could now expect there to be two to three interested parties. Of course it also means that while the market may be less competitive, it has also become more expensive.

Supply is not matching demand

Indeed figures from myhome.ie point to an ongoing reduction in supply. In August 2012, there were 39,978 properties listed nationwide on the portal, 4,926 of which were in Dublin. Fast forward to August this year, and numbers have fallen by 36 per cent, down to 25,197 nationally, and by 27 per cent to 3,586 in Dublin.

Nonetheless, there are signs of life emerging from two key drivers of demand, which have thus far lain dormant.

Firstly the trading down market is becoming active again, particularly in Dublin, as the recovery in prices is starting to spur those sitting in houses which are too large for them, and which they may no longer be able to maintain.

Reilly knows of a couple of houses in the south suburbs where the owners have deferred the decision to sell up each year for the past five years. “Now prices are at a level where they are happy to sell,” he says.

“As prices increase, sellers are more confident of achieving a good price and want to take advantage of current market demand,” she says. A serious constraint to this market however is the absence of bridging finance.

“In the old days, if you were looking to trade down you went out and sourced what you’d be happy moving to, and bought it with bridging finance,” says Ensor.

Now however, bridging finance is in scarce supply which makes it is a riskier proposition for someone to sell their house first, and hope to find a suitable property for themselves second. “It’s definitely causing a bottleneck,” says Ensor.

The other market that is showing signs of life are people who haven’t been able to move out of apartments or starter homes because they were trapped in negative equity. The people whose “2/3 year apartment plan turned into a 7/8 year plan” as Reilly puts it.

Now however, a combination of rising prices and paying down the mortgage, means that this cohort are reaching a point where it may be possible to trade up again.

Now however, there are signs that the market outside of Dublin has started to turn, with agents pointing to a marked increase in activity and demand.

“While it may not have yet pushed through to actual house price increases, it has certainly stopped the depreciation,” says Ensor, noting that as this increase in activity happens, it is more than likely that it will filter through to house price inflation, albeit at a very modest rate.

However, there is no evidence yet that this interest is spreading to the so-called ghost towns dotted around the country.

The banks are back in business

Financial adviser Michael Moore of Moore Independent Consultants says that the banks are back lending – but primarily to the better candidates. To be a “better” candidate, he says documented evidence of savings and rental payments are necessary, as well as a full-time job.

Moore says that banks are also lending for apartments again, but typically impose a “rural/urban” divide on lending decisions. This means that it might lend upwards of 70 per cent for an apartment within 20 miles of Dublin’s city centre – but may not lend in more rural areas.

Cash buyers are declining To date cash buyers have undoubtedly propped up activity levels, and they may also have been propping up prices. Now however, the pendulum has started to swing in the opposite direction. Earlier this year cash buyers accounted for almost one in every two of all sales. But an August survey from the SCSI showed that cash buyers accounted for little more than one in three purchases in the property market in the second quarter of 2014. While based on a survey of property professionals, rather than actual sales, it indicates that those on the front line are seeing a reduction in the number of people funding property purchases themselves – and this will likely filter through to official statistics.

Figures are for illustrative purposes only; houses may not be directly comparable