Four Irish artists have been shortlisted for the award 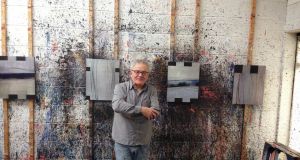 Charles Tyrrell, who has been shortlisted for the Savills Art Prize, which will be presented at Vue 2017, Ireland’s national contemporary art fair, which runs at the Royal Hibernian Academy from November 2nd-5th.

Nice art and good homes go together like tea and toast so it’s no surprise to see estate agents Savills sponsoring the visual arts, with the third Savills Art Prize due to be announced this evening.

Four Irish artists have been shortlisted for the prize, which at €5,000 makes it one of the most sought-after in art circles. The winner will be announced at the launch of Vue 2017, the contemporary art fair at the Royal Hibernian Academy gallery. Janet Mullarney, Samuel Walsh, Charles Tyrrell and John Gibbons are in contention for the award adjudicated by RHA director Patrick Murphy on nominations from a panel of Irish art experts. Last year’s prize was won by Patrick Graham.

“Art is wholly complementary to property and homes and, as such, it was important to Savills that we support this significant prize at Ireland’s national contemporary art fair,” says Roland O’Connell, chairman of Savills, which had a bumper year in earnings mainly through the sale and purchase of large commercial properties.

“We hope that, in the long run, this annual award will become as significant to Irish art as the Turner Prize,” he adds.

‘The virus will be back’: Preparing for the second wave of Covid-19
5

‘I am the only person in the pool.’ A postlockdown stay at a landmark Dublin hotel
7