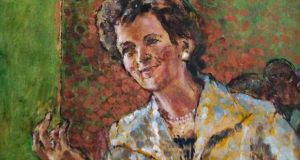 Former president of Ireland Mary Robinson will sell the contents of her country home in Co Mayo by public auction next month. She and her husband Nick Robinson, who are downsizing, have already sold Massbrook – their Victorian shooting and fishing estate on 113 acres on the shores of Lough Conn – for €1.55 million. Now the couple have consigned the contents of Massbrook House and its gate lodge to Sheppard’s auctioneers in Durrow, Co Laois, to be auctioned on November 28th.

Sheppard’s said the contents have been moved into storage and will go on public view in their saleroom from Saturday, November 25th. The contents of Massbrook include a mix of antique and modern furniture, pictures, glass, crockery, garden sculpture, taxidermy and various collectibles. Some 200 items, with a combined top estimate of “around €200,000”, will go under the hammer.

An online and print catalogue for the auction is expected to be published this weekend.

Mrs Robinson was the seventh – and first woman – president of Ireland, and served from 1990 to 1997. The Robinsons had been living in Sandford Terrace, Ranelagh, Dublin, until 1990, when they moved to Áras an Uachtaráin. They bought the Massbrook estate in 1994, and lived there after Mrs Robinson left office.

However, last year they put the house on the market as they are downsizing and returning to Dublin. In a statement at the time they described Massbrook – with its 630sq m (6,781sq ft) house, gate lodge, and extensive lakeside landholding with fishing rights – as “a haven of peace and tranquillity”. The Robinsons had sought a price of €2.72 million for the property, but it fetched the considerably lower price of €1.55 million when it sold recently to Co Tipperary entrepreneur Malcolm Bell.

Before she became president Mary Robinson was a Senator and a well-known barrister. After the presidency she became the United Nations High Commissioner for Human Rights from 1997 to 2002.

She has since established The Mary Robinson Foundation – Climate Justice, an organisation headquartered in Dublin which describes itself as “a centre for thought leadership, education and advocacy on the struggle to secure global justice for those people vulnerable to the impacts of climate change who are usually forgotten – the poor, the disempowered and the marginalised across the world”.

Nick Robinson is a lawyer and author, and was for a time in the 1970s a cartoonist for The Irish Times.

Sheppard’s said the Massbrook contents were still being catalogued, and has not yet published a list of lots with estimates. Yet among them will be portraits of the couple by well-known English painter Derek Hill, who lived for many years in Co Donegal and died in 2000. Portrait of Mary Robinson and Portrait of Nick Robinson will be auctioned separately – each with an estimate of €3,000-€5,000.

Other interesting lots include kitchen crockery (featuring images of a harp and Phoenix Park deer) commissioned by the Robinsons from the Louisburgh, Co Mayo ceramics artist Anthony O’Brien; a Georgian Dublin grandfather clock made by William Raymon; an important library table; Japanese garden sculptures; and, a circular stone trough that Sheppard’s thinks “could be 16th century”.

Quirky lots include a “Catholic Emancipation” poster from 1829; a Persian prayer rug; a bottle of Hennessy brandy bottled to mark the bicentenary of the United States; an Anglo-Indian jewellery box; and a Victorian iron garden roller.

Speaking about living in Massbrook, Mr Robinson told The Irish Times last year: “Our idea of entertaining is just getting four or five really interesting people around the kitchen table, rather than formally entertaining on a large scale.” Well, that very kitchen table will be sold along with items of Georgian, Victorian, Edwardian and 20th century Irish furniture.

According to Sheppard’s, the items being auctioned are from the private, personal collection of the Robinsons. Some gifts presented to Mrs Robinson during her term as president – including art and sculpture – that were on display in Massbrook House are, Sheppard’s said, “not included in the auction as they are being donated to museums”.

Also not in the auction is an archive that had been stored in the house and which contains thousands of documents spanning a period of almost 50 years of Mrs Robinson’s life, including material relating to her time as a barrister and Senator, and her personal papers relating to her presidency. The archive has instead been donated to NUIG (Galway University).

The archive was controversially valued at €2.5 million in 2012, and Mrs Robinson had originally planned to donate it to Mayo County Council in return for a tax credit of 80 per cent of the value. The council planned to put the archive in a “Mary Robinson Centre” to be created in her home town of Ballina.

However, following a public outcry concerning her availing of tax credit, Mrs Robinson last year cancelled the planned donation to Mayo Co Council and decide, instead to “gift” the archive to NUIG and to forego the tax relief. The initial plan had raised questions about former public representatives claiming such tax credit. In a Dáil debate on the subject, Sinn Féin TD Peadar Tóibín said: “Does it make sense for a well-pensioned former public representative to have the materials which were created while they were in the employment of the State, be the subject of a tax relief in the future?”

Despite her decision to donate the archive to NUIG, Mayo County Council is proceeding with its planned €5.1 million “Mary Robinson Centre” in Ballina. In September 2017, Mayo County Council voted to purchase Mrs Robinson’s former childhood home, Victoria House in Ballina (and adjacent buildings) for €510,000. The property is owned by Mrs Robinson’s brother Adrian Bourke.

Only two of Mayo’s 30 county councillors – both Independents - voted against the planned centre: Frank Durcan who said the project “is going to be a complete white elephant with 90 per cent of the Robinson archive material going to be located at NUIG”; and Gerry Ginty who called it “a vanity project”.