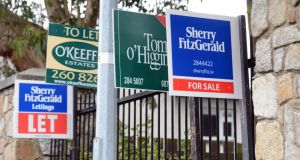 A lack of available rental properties, rising rents and restrictive rent caps were all feeding into the housing and homeless crises in Ireland, said Niamh Randell, national spokeswoman for Simon. Photograph: Cyril Byrne

Current rent allowance caps mean families on rent supplement are extremely restricted in entering the private rental market in Dublin due to a lack of affordable properties, a search of the country’s two biggest property websites has revealed.

Using current rent caps provided by the Department of Social Protection, The Irish Times searched property websites Daft.ie and MyHome.ie in the middle of last week to see what rental options were available to families on rent allowance in Dublin city.

It found few private rental options for a one-parent family with three or more children on rent allowance in Dublin city centre, allocated up to €1,000 under the State’s rent supplement scheme.

The search took in all of Dublin city centre and, on Daft.ie, used a search option to exclude properties where the landlord did not accept rent allowance. The only other search criterion applied was that each family member should have a bed space.

Landlord criteria A search on Daft.ie for a three-bedroom property in Dublin city area – filtered to capture ads where the landlord had cited that rent allowance was accepted – returned just three properties, one of which was a student residence. Both other properties were located in Dublin 24.

A search for a two-bedroom property within the stipulated rent cap returned 21 properties within the Dublin 1 to 24 postcodes, two of which were student residences. The number of properties effectively available to families made up of a couple or a single person with two children, whose rental cap stands at €975, stood at 13.

Meanwhile, a search for a two-bedroom property for a couple with one child whose rental cap stands at €950 returned just 10 options.

Similar searches on MyHome.ie – which removed a “no rent allowance” filter from its site earlier this month – returned one three-bedroom property for rent in Dublin 9 at €950 a month, a price allowable under the rent cap.

However, a cross-check showed that the same property was also advertised on Daft.ie where the landlord stated that rent allowance was not accepted.

A total of seven two-bedroom properties were available in the Dublin 1 to 24 postcodes on MyHome.ie for €1,000 or under. However, a couple or a single person with two children, whose rental cap stands at €975, had just three rental options while the rental cap of €950 for a couple with one child saw the number of properties fall to just two. Both of these latter properties were also advertised on Daft.ie and both ads stated that rent allowance was not accepted.

Feeding homelessness Niamh Randell, national spokeswoman for Simon, said a lack of available rental properties, rising rents and restrictive rent caps were all feeding into the housing and homeless crises in Ireland.

“There is an acute supply issue . . . because rents are increasing and rent supplements are at rates that are too low so people on low incomes are effectively being pushed out of the market. Not only is this causing homelessness but it’s also preventing people from leaving homelessness,” she said.

Ms Randell called for rent supplements to be adjusted to come into line with “real rents”.

However, a spokeswoman for the Department of Social Protection said increasing the maximum rent limits for rent supplement would not resolve the current difficulties and would instead result in further increases in rents.