Priced out of Drumcondra? Consider Whitehall

It’s close to the city centre, has lots of green space and traditional homes with good gardens 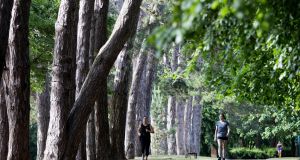 Whitehall, Dublin 9, is a northside neighbourhood located about 4km from Dublin city centre, and less than 7km from the airport on the nearby M1 motorway.

You’ll find it just north of its better-known neighbour, Drumcondra, and south of Santry. It’s an area that many might associate with its landmark redbrick 1950s church at the crossroads of Swords Road and Collins Avenue, but there’s a lot more to the area, not least its relative affordability compared with Drumcondra.

The crossroads was also the location of a pub called The Thatch, the name later adapted for a nearby residential road.

Until 100 years ago the area was mainly agricultural land with a scattering of large period houses such as Broomhill – an Italianate mansion now incorporated into the Bonnington Hotel (formerly the Dublin Regency Hotel), as well as the Eustace estate, now a private hospital, Highfield Healthcare. White Hall, a house that gave the area its name, is no longer standing. The site is now home to the Whitehall College of Further Education.

Surburbia crept in in the mid 1920s when a small estate, Gaeltacht Park, was built, with just 10 large houses. For seven or eight years these houses stood alone, before smaller houses were built around the park, with addresses such as Iveragh Road and Iveleary Road coming into being.

However, it wasn’t until the 1940s that Whitehall began to experience its first construction boom, when Swords Road and Collins Avenue were extended. A number of estates were built in the 1970s, including Courtlands and the neo-Georgian Griffith Downs, as well as apartments in the Celtic Tiger period, with Grace Park Manor, built by Cosgrave in 2002, just behind the Bonnington Hotel, and Hampton Lodge, off Grace Park Road, built in the same boom period.

“A lot of Drumcondra buyers in recent years have been buyers that were priced out of the southside, and in Whitehall you’ll find buyers who have now been priced out of Drumcondra, largely. Whitehall also has a great GAA club in Whitehall Colmcille, which has also been an attracting factor for those moving to Dublin from more rural counties,” says Emma O’Callaghan, Kelly Bradshaw Dalton office manager.

The main artery is the Drumcondra Road, running into the Swords Road, which becomes the M1, running directly out to Dublin Airport. This stretch of road is the third-busiest in the city, and at rush hour is bumper to bumper, with the enlarging of Drumcondra Road helping matters but not alleviating the issue completely. That said, outside of peak times, the road moves quickly enough, and there are also alternative routes into the city via St Mobhi Road and also the Malahide Road, with 10 bus routes serving the area around Swords Road.

The planned Metro North route will also be a game changer for transport in the area, if indeed it happens, with two stops accessible, at DCU and also Griffith Avenue.

Couples have tended to stay in the homes long past initial purchase, and with the need for more space, have created single-storey extensions out the back with larger kitchen and dining spaces. The homes are also notable for large garden space, even in the smaller two-bed homes, as well as redbrick ground floors, with pebbledash or concrete first-floor frontage a dominant feature. It’s predominantly a low-rise neighbourhood with less stock available than in nearby Santry, which has more apartments.

On the Swords Road, just prior to the Collins Avenue junction, there’s a 6.75 acres site, which has been approved for planning for 358 apartments and is for sale at €18 million.

A social-housing scheme is under construction on the corner of the Ballymun Road junction with Collins Avenue, where Oaklee are developing 42 units directly opposite the public library.

There is one further plot of land, accounting for several acres surrounding Castletimon Gardens and Lorcan Crescent, which at present is wild grassland, but would be able to fit several hundred units and would have direct access to the M1 from Oscar Traynor Road.

More of an area than a village, Whitehall has a few pockets of commercial outlets, with the two central ones based around the Swords Road/Collins Avenue junction, with a selection of takeaways, cornershops, a pharmacy and the well-known The Viscount Pub. Farther down the Swords Road towards the Drumcondra Road junction there is another grouping of shops around the Bonnington Hotel, including a McGettigan’s gastropub. Just east of that, just outside the Whitehall border is Twenty2, one of the best eateries in Dublin 9. The Ballymun Road side, or west side, of Whitehall has its own village also, with a convenience store and also The Slipper pub. Andersons Food Hall and Cafe is also near that stretch, another of Dublin 9’s go-to eateries.

The Santry end of town is the real commercial hub, though, with a huge range of restaurants, coffee shops, and supermarkets, catering for most needs. Outlets include a cinema, O’Brien’s sandwich bar, H&M and Camille Thai.

It would be hard to find an area of north Dublin City with more green space. Ellenfield Park, with its numerous playing fields, is very noticeable from the Swords Road heading towards Dublin Airport, located adjacent to Whitehall Church. Albert College Park is a green lung that feeds into the outdoor grounds of DCU; Courtlands Park serves that 1970s-built housing community and is a lovely, quiet recreation area. There is also a fourth, large, green area to the north of Whitehall, on grounds located within an L-shaped nook of Oak Park Avenue.The twin sporting draws of Whitehall Colmcille GAA and Home Farm FC are also both attractive to buyers, with both sporting organisations well established and with communities developed around them.