Priced out of Clontarf? Consider Marino 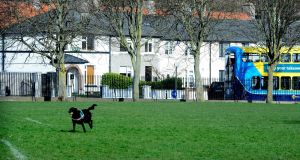 Marino Park is one the many green spaces this north city suburb has to offer. Photograph: Cyril Byrne

Marino is one of Dublin’s smaller neighbourhoods in terms of size but it packs a punch in terms of quality and livability, and compared with nearby Clontarf and Drumcondra – both soaring in value – it offers an overlooked alternative, with prices best described as competitive.

“The majority of house-hunters looking at Marino are local buyers from areas such as Clontarf, Killester, Raheny and Artane, ” says Shane Doyle, director of iMove Estate Agents. “The leading number of buyers would be from Clontarf.”

“As well as buyers looking to get value in Marino, we also have people from East Wall and North Strand who are looking to trade up to a more expensive property in Marino,” says Catherine Seagrave, DNG Fairview senior negotiator.  The area is also popular as a trade down location for Clontarf empty nesters.

Marino was originally was part of Donnycarney before it was carved out to form its own suburb, with a border lined by Philipsburgh Avenue, Griffith Avenue, Malahide Road and Fairview Strand. Although the border is somewhat porous at the northwestern end, with properties on Sion Hill Road and a section of Grace Park Road listed by some as Marino, some as Drumcondra.

Similarly at the south end of Philipsburgh Avenue, Windsor Avenue is by turns listed as Marino or Fairview. At the northeastern end, the Casino at Marino – an Irish neoclassical piece of architecture – and also St Vincent’s GAA club, are in a porous section of Marino and Donnycarney.

In the 1920s, the area was developed through Dublin City Corporation’s first social-housing scheme, based on the Garden City housing scheme first envisaged by Ebenezer Howard in 1898, which involved the idea of transplanting citizens from inner-city slums to city suburbs, with a parkland at its centre, and good transport links to the city centre.

City planner Patrick Geddes proposed a civic survey that would rehouse those in Dublin’s city tenements and relocate them on what were then the outskirts of Dublin’s city boundaries. Construction took place in the 1920s, with 1,500 homes eventually being built in three phases, which were eventually linked to Glasnevin by the 100 Foot Road, which is now Griffith Avenue.

It was an idealistic model that has left Dublin with a beautifully designed town that is unique in the sense that it was deemed too expensive to be repeated and therefore represents a very specific moment in Irish urban design.

Today’s Marino is a north city suburb that has managed to maintain its village feel, largely due to the fact the original builds are still present, as well as the excellent green spaces that were the original focal point of the Garden City design.

In terms of shopping there is a short row of shops on one side of the northern end of which includes C&T Superstore independent supermarket and Donnelly’s Home Bakery, which was established back in 1954.

The standout shop on the row is Larry’s Marino Fair. Originally a butcher shop, the building was gutted and redesigned and maintains a craft-butcher offering but also has an excellent range of artisan food produce for sale.  Howevers locals will tell you that Marino Mart at the other end of Marino, where Fairview Strand meets Malahide Road, is the main retail area. This was the original purpose-built shopping block in the 1920s design, and now includes Wright’s fish shop, the local butchers’ and the Fresh Market deli/vegetable shop, plus post office, Martin’s off-licence (which recently one an award for best offie in Dublin)

A little further afield, Clontarf offers The Food Room, with a wide range of lunch options and Illy and 8th Corner coffee, and also the newly opened Clontarf Baths Bar and Restaurant, with plans to open the baths themselves “in late April to swimming clubs, and hopefully after that to the public”, says operations director Rita Barcoe.

Off the northern end of Marino and Griffith Avenue, access to Drumcondra’s eateries – including Andersons Food Hall and Café, The Goose Tavern and Twenty2 Restaurant – are another additional benefit of the area.

What housing is available?

The stock available is limited, due to the high demand for properties, with anything in the area selling in three to four weeks. The entry point to the market is a three-bed, end-of-terrace property at 7 Casino Park for €360,000, with further three-bed end-of-terrace and terraced homes at 103 Brian Avenue and 149 Brian Road both starting at €395,000.

The price differential between the properties available is usually down to interior condition, combined with whether the homes have been extended out at the back. Those that haven’t been extended yet have the potential for two-storey extensions to the rear.

Are there any new developments?

A lack of available space means that new developments are largely absent. There is a vacant lot of land, with planning approved for 10 townhouses, at the corner of Fairview Avenue Lower and Fairview Terrace, but without any specific plans for the land to be developed. Cairn Homes, meanwhile, is submitting plans to An Bord Pleanála for a predominantly apartment development just off Griffith Avenue. The proposed scheme, Griffith Demesne, is set within parkland and includes a crèche and new public park.

Owner-occupiers dominate the area with hardly any investor homes in the town, which adds to the village-community feel in the area. The majority of those buying are young couples or families with one child who see the area as an ideal place to “locate to for 20-years plus”, says Doyle.

The community is majority Irish, both older residents and newer buyers, however, there are a number of western Europeans who have bought in recent times.

Marino is a 30-minute walk to O’Connell Street, with the IFSC closer still, making it an ideal base for those working in the city centre. Should one wish to take public transport, the 123 and 130 bus routes run regularly to the city, with Clontarf Road Dart Station also located a short walk from Marino.

Green space was built into the town from the outset via Marino Park as the central park and St Aidan’s Park, Fairview Green, Croydon Green and Marino Green built leading off the main park.

However, Fairview Park is another large, green space nearby, with a number of playing pitches located within its boundaries, as well as a skate park. The park was originally a tidal mud flat, which was used for landfill in the early 1900s, before being developed as a green space by the corporation in the 1920s.

It would be hard to say the area is missing much, with the range of amenities, property and green space all excellent.

However, a high-end restaurant along either the Marino village strip, or in nearby Fairview, is one particular desire a number of locals mentioned to The Irish Times during our visit there.