Paint your way to a better home

The most effective way to give your home a makeover is to change the colour scheme, but nothing is forever and you can change your mind as the mood takes you 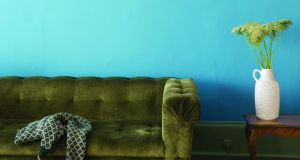 With longer days and milder weather here, spring is the ideal time to freshen things up at home. Painting your interiors is the most dramatic yet least expensive way to update your house.

In 2008, the discovery of the Blombos Cave in South Africa showed that homo sapiens were mixing paint 100,000 years ago. Described by archaeologists as a “paint factory”, our ancestors had simple choices: red, yellow or black.

With paint manufacturers adding new colours to their collections annually, paint shops now offer about 10,000 colour choices. This overwhelming array often leads many to surrender to a colour out of frustration and confusion. Just because the human eye can distinguish 10 million colours, do we really need 400 options to find the perfect shade of white?

To confuse buyers even further, the eccentric names given to some paints give no indication of their colour. Elephant’s Breath, the very popular colour now sold by Farrow & Ball, has actually been around in various shades for over a century and was “all the rage in 1874”, according to historian Deb Salisbury.

“The biggest mistake most people make when choosing a paint is not understanding how light works, so understanding the light in your space is the key to realising the perfect colour scheme,” says Colortrend colour psychologist Adele Roche.

Head of creative at Farrow & Ball Charlotte Cosby says: “You also have to look at the undertones and artificial light when choosing a colour. Halogen and incandescent light make rooms warmer, whereas LED emits a cooler light and is more suitable for contemporary interiors. If a room is often lit with candles, it is better to choose a velvety colour.”

Kevin Coghlan of MRCB, a Dublin-based specialist in paints and wallpapers, says: “You need to test colours in situ and remember that colour takes on the tones of light sources, with north and easterly rooms giving off cool hues, and warmer tones from the south and west.” Within these tonal differences, greys and any colour with blue as a base are particularly susceptible.

These days, all good paint shops have colour consultants to work you through the myriad of options and help define the mood required. The colour consultants at Pat McDonnell Paints have extra training in colour for children with cognitive learning challenges such as autism.

There are also various trends in play. For 2015, Paris is embracing moody indigos and marine blues, while in the US plums and greens are popular.

In Ireland and the UK, upmarket furnishing showrooms have displays in varying tones of grey. This versatile new neutral, having replaced creams, has degrees of “temperature” and can emit warm or cool tones. A common mistake is to use too “cold” a grey, which can suck the life out of a space.

Suppliers MRCB and Pat McDonnell Paints say greys are still in big demand, but there is also new interest in subtle pastels.

For manufacturers such as Colortrend, Farrow & Ball and Crown, new ethereal pastels feature strongly for 2015, while Dulux is all about copper oranges and earthy palettes.

Accent walls, whether wallpaper or colour, are now passé and are being replaced with zonal schemes, where block colours are used to distinguish entire segments. Textured wallpaper in neutral colours has replaced loud patterns. Farrow & Ball also suggests decorating floor by floor, using colours of the same tonal weight and switching wall and woodwork colours in adjacent rooms for dramatic effect.

Until the 1990s one of the most hazardous toxins used in household paint was lead, which due to its sweet taste often ended up in the mouths of children, causing damage to the central nervous system.

It is also suggested that Napoleon Bonaparte died of arsenic poisoning (and stomach cancer) from the green paint on the wallpaper of his house on the island of Saint Helena. Scheele’s Green, a deep emerald paint, was popular for almost a century but was linked to “children wasting away in green rooms” from arsenic poisoning.

There has been a recent seismic shift away from high volatile organic compounds (VOCs) to water-based and organic paints due to toxicity.

If procrastinating on colour, hues and tones all becomes too much, it’s fine to stick with white until you have found your perfect shade.

Also remember that trends become obsolete, so choosing a simple, yet timeless colour can be more durable in the long run.

- Choose colours that complement your furniture and fittings – it’s the cheapest element of design.

- Consult the colour wheel. Developed by mathematician and physicist Isaac Newton, it shows what hues complement each other. MRCB.ie has a great section on choosing the right paint and how to estimate the volume required.

- Chalk paint such as Annie Sloan can give old furniture a new life. As palettes are quite limited, you can make your own by mixing three parts paint to one part plaster of Paris, adding water for the correct consistency.

- When you have narrowed your choice, buy tester pots (colour cards are too small). Paint at least two walls with 2ft x 2ft squares and live with them for a week, looking at the various hues they throw off at different times of day and night.

- Don’t panic: if you don’t like the results, it is very easy to change.

Róisín Ingle: After seven months of this headwreck, what needs to be done feels harder than ever
10