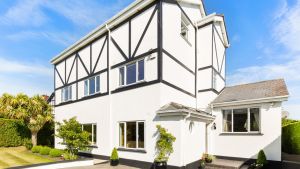 The last time number 8 Woodlands Park, Blackrock, changed hands was in 1992. Then, the young couple returning to Ireland from Hong Kong were looking for a large house for their growing family and the detached property in the cul-de-sac fit the bill.

The address they felt was an omen – they had lived in Asia long enough to know that eight was a lucky number and they were leaving an apartment with the number eight. Now downsizing they say the decision has proved correct – it has been a lucky, and happy, house for them and their children who have now moved on.

There’s no doubt that the 297sq m (3,196 sq ft) three-storey, five-bed detached house is unusual looking. It was built in the 1940s by a German woman who had a taste for Art Deco and her design was a plain two-storey, white-rendered house, with low, rectangular windows and a flat roof with railings to the front and with a rooftop sunroom.

The current owners extended on both sides: on one side a garage made way for a TV room and a new entrance hall; to the rear, a single-storey extension greatly enlarged the open-plan eat-in kitchen and made space for a well-appointed utility room. Most dramatically in terms of changing the look of the house, they replaced the flat roof with a pitched one over the entire area giving themselves two additional bedrooms, one of which is a very large main bedroom with bathroom en suite and dressing area. They added the black timber detailing, similar to that found on more traditional looking house in the cul de sac.

The house’s first owner sourced a fine period white marble fireplace and that’s the centrepiece of the large, bright living room to the front. Beside it is a room used as a home office. The living room is L-shaped, leading into a dining area, which opens into the kitchen. There is plenty of family-friendly space on this floor including the TV room and a den.

The bedrooms, all good sized, are spread over the two upper floors. The bathrooms – including the en suite – were updated just two years ago and decor throughout has been kept up to date including new carpeting in the hall, stairs and landing. The house has a respectable building energy rating of C1.

The house sits on a quarter of an acre and photographs from the early 1990s show the large gardens were mostly in lawn – that has changed due to the owners keen interest in gardening and the private back garden in particular is lovely with patio areas, raised terraces, interesting planting for colour and structure and a lawn.

The house – and the garden – is so large the owners knew they would be downsizing but expected that time would come later. However they have found a smaller house in Blackrock that they feel will suit their future needs and have placed 8 Woodlands Park, also called Woodland Park House, on the market through Colliers seeking €2.25million.