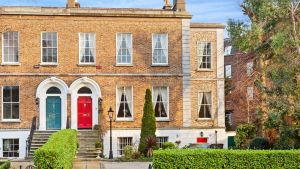 After 32 years at 70 Wellington Road, one of Ballsbridge’s finest and sought-after addresses, the owners are moving on from the end-of-terrace Victorian, hoping to downsize in the neighbourhood. It was already a substantial house when they bought but they soon extended to the side to bring the two-storey over garden-level property to a substantial 360sq m (3,875 sq ft).

The houses on this wide and quiet road were mostly built between 1845 and 1855 as the area’s owners, the Pembroke Estate, sold off plots in stages to several builders which accounts for the slightly different styles along the road.

The builder of number 70 also built the three neighbouring houses in the terrace, one for each of his well-provided-for daughters, and each has a distinctive moulding of a river god in the arch over the entrance.

Number 70 was always different from the others – being end-of-terrace, he could build on a two-storey addition to the side, giving extra width at garden level and above, an additional room off the fine drawing room at hall level.

The current owners, once they sourced the matching brick and feeling that it would make the house look more finished, built on to this side addition making it three storey like the rest of house and giving themselves a substantial en suite to the main bedroom.

When they bought, the garden level was already lived in as a separate apartment and they kept that configuration and it is now a two-bedroom apartment both en suite with a large living room and kitchen.

These are – and always were – grand townhouses and the entrance hall and landing in number 70 is particularly fine; the builder upping the specifications for his own house to include the elaborate cornice work on the landing ceiling, which also features a large skylight throwing light down through the house.

At hall level a formal dining room is to the rear – the two main reception rooms, both beautifully proportioned, don’t interconnect – and the eat-in kitchen is to the rear. A lovely feature here is the small railinged terrace outside the kitchen door while there is access down to the garden via a flight of steps.

Upstairs are four bedrooms, one with that side en suite, as well as the family bathroom. The owner recalls that when they bought, it was a year before they were able to move in as the considerable work involved in making the house a comfortable modern family home ranged from re-roofing to damp-proofing while care was taken to restore the house’s many period features including cleaning the fine marble chimney pieces and updating the sash windows. Since then ongoing maintenance and decoration has made the house, says the owner, “a labour of love”.

The back garden was in recent years reworked for low maintenance, sandstone replacing the lawn, with deep beds filled with shrubs, trees and flowers.

There is off-street parking for several cars to the front.

Unless they have other plans for it, such as au pair accommodation or living space for older family members – new owners might consider reincorporating the garden level into the main body of the house – the original staircase is in situ.

For a new family it will all depend on where they want to locate their kitchen – update it and keep it up at hall level or move it down to garden level where they can have a large eat-in kitchen with an adjoining family area.