Two for one artisan Dún Laoghaire cottages for €595k

The amalgamated property could easily be divided back into two houses 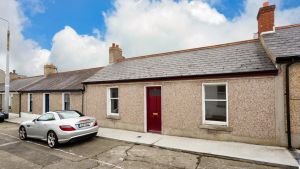 Stoneview Place is a small cul-de-sac of artisan cottages just off George’s Street Upper in Dún Laoghaire. Numbers 2 and 3 were home to octogenarians Patrick and Elizabeth Larkin who recently passed away.

Their lives, recounted by niece Hillary Byrne, were filled with adventure, where they lived each day to the full, skiing up until their early 80s and with Patrick cycling through the Alps at the age of 86.

“They travelled the world for a decade: first they took a bus from London and ended up in Afghanistan, and then spent five years on a boat in Cap Ferrat on the French Rivieria. They finally came back to Ireland in 1980 with a white left-hand drive Citroen.”

The couple bought number 3 Stoneview Place “when they hadn’t a bob” and just relaid the foundations in the artisan dwelling.

Patrick, a pharmacist originally from Drogheda, established a chemist shop around the corner and Elizabeth, an artist and art restorer, set up shop in their home.

When number 2 next door came on the market, the couple purchased the house and amalgamated the two properties.

“Patrick really wanted to be an engineer, but the family were always pharmacists so he followed that career path. Because of his love of building he did most of the work in the house, and did it in quite a clever way so it could easily be divided back into two houses,” recalls Hillary.

While it needs complete renovation, it is really a lovely space. The old stone walls in the main living room – now whitewashed – serve as a reminder to how old these cottages are, and the exposed pitched roof gives an airy feel, with light shining through many Velux.

To the rear, and accessed from two doors at either side of the property, is a lovely sunny cottage garden filled to the brim with flowers and a knobbly Chinese Wisteria. There is also a lovely painted pergola with an inbuilt seat where Patrick and Elizabeth took their morning coffees.

In its current layout, the property has two bedrooms, two bathrooms, a sunroom and large open-plan living-dining-kitchen area. There is also a spacious room – warmed by a Godin stove – where Elizabeth had her art studio.

While a cosmetic overhaul would have it back in shape in no time, a good architect could work wonders in the space given its size at 145sq m (1,560sq ft).