Sunshine, sea breezes and private garden in Dalkey for €1.5m 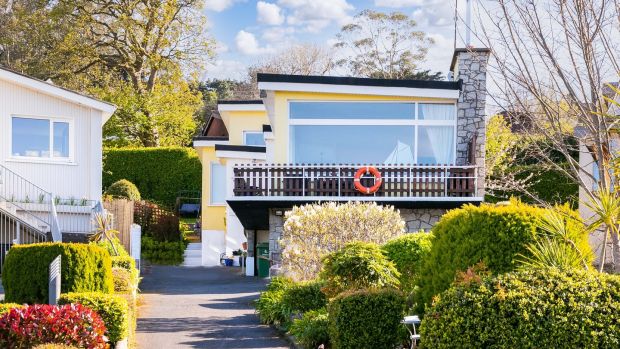 Perched above Dalkey village and tucked into the side of the hill, 23 Knocknacree Park is a pocket of sunshine bursting with character and teeming with greenery. Named Selskar, after the 12th-century priory in Wexford town, it was built in the mid-1960s and the current owners have lived there for 40 years, filling every corner with their personalities, influences and many interests.

The 140sq m (1,501sq ft) four-bed property sits at the top of a steep driveway with a carefully-planted, rocky garden. The entrance is at the side, past the boiler house and store, so as not to compromise the uninterrupted views from the front.

The sea comes into every room; from the front, where the owners breakfast on a balcony that spans the width of the house, to a window in the main bedroom at the back. It’s in the wind that whips up from the deep blue past the village and down from the quarry behind. And it’s in the sand that the owner incorporates into her paintings, the wash of the shed-studio she calls her “summer palace”.

Once up the steps and into the hall, the sea view draws you to the living room on the right and its huge window, double-glazed and designed to frame the view to the north east, with Howth directly across; you could set your clock by the pattern of the passing vessels. Indeed, the owner says, she could track their children’s sails from that side of the house, and be down to the harbour to greet them as they berthed.

That huge front room includes a dual-fuel stove set into a stone-faced chimney breast, and the wooden floor continues up a couple of steps to a dining area. This leads into the galley kitchen which turns its back on the sea; new owners could consider removing stud walls, squaring off the hall and reconfiguring the space to embrace the brighter aspect. Off the kitchen is a handy pantry and store that leads into the multifunctional garage.

Up a few steps from the hall, past a guest toilet with a stained-glass yacht window and two sets of built-in storage, are two good-sized bedrooms to the right and a family bathroom to the left. Past this is the main bedroom with windows to the sea and to the back garden, a large shower en suite and a bank of built-in wardrobes. To the right is a jolly yellow guest room with glass doors to a long conservatory, where clothes would dry in five minutes and many hours could be lost all year round.

This leads out to a wide terrace with comfy couches to flop on to, and beyond it a jewel of a sheltered and private garden that faces southwest, with the aforementioned palace, a second shed also wired for working in, and a third for garden tools. Dotted around to take advantage of the sun at all times, and to provide rest after tending to the lush plants, are a swing seat, a pretty patio and a big dining table. You’d even envy the frogs and the fish their lovely pond, with its rocky base giving a glimpse of the quarry behind.