Stroll down for a coffee from Drumcondra three-bed for €725,000 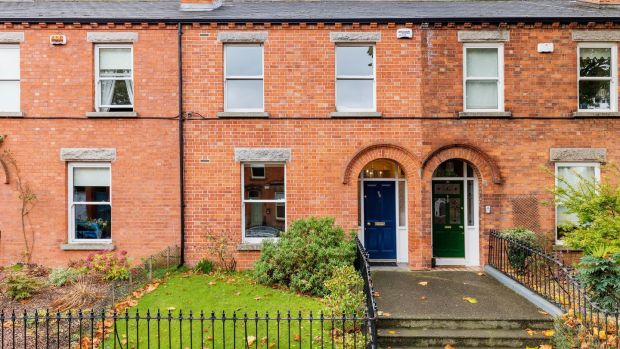 Hollybank Road is one of Drumcondra’s sylvan streets with mature sycamore trees flanking each side and golden leaves scattering the sidepaths at this time of year. Set on a hill on the city side of the village, the Victorian redbrick-lined road is a block from Anderson’s, one of the neighbourhood’s best-loved cafes.

Number 56 is on the sunny side of the street and has been extensively renovated, with much of the work done in 2006, before the present owners bought it.

It opens into a good size hall with two small interconnecting reception rooms off it. The room to the front has an open fire and double doors leading through to the back room where there is a wood-burning stove, French doors out to the back garden and a glass block detail in the exterior wall allowing for the transfer of further light into the space.

The eat-in kitchen is in the return to the back of the property. You walk into the cooking quarters with the dining area to the rear where glass double doors open out to the stepped south-facing back garden.

The white kitchen units are topped with black polished granite counters which drop below one of two side windows that stream light into the room, creating a natural place to perch. The dining area is light-filled too thanks in part to smart addition of a roof light to stream light in from above.

The doors open out to a valuable south-facing flagstone patio and a garden landscaped by Garden Transformation that is stepped to the back, rising to meet the southern aspect sunlight.

While smart, it does feel that more of the valuable 11 metres of potential lawn has been taken up by hedges to shield the bins and to shield the stepped wall to the front. It would be worth reconsidering the hedging to take better advantage of this raised area at the top of the garden. There is pedestrian rear access.

The house measures 115sq m/1,238sq ft in size. The current owners added an additional 18sq m/193sq ft of attic room space and when doing these renovations smartly installed a shower room in the master bedroom under the steps to the attic. This means the proportions of this generous room have not been compromised.

There is a second bedroom on the first floor with the property’s third bedroom, a single on the return, where the small family bathroom is also located.

DNG is currently selling number 19, which is asking €649,000. Situated on the opposite side of the street, this Edwardian two-storey over basement property, which measures 153sq m/1,647sq ft, has a long back garden and garage to its rear.