Spacious two-bed in hipster Stoneybatter for €425,000 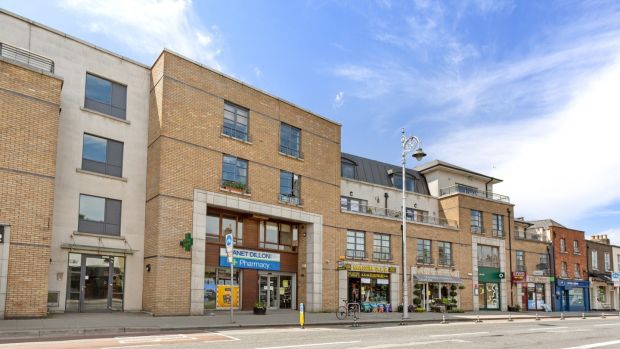 There are phenomenal views from the rooftop terrace of Norseman Court, a relatively low-density apartment scheme of about 60 properties, whose principal entrance is on Manor Street, hipster Stoneybatter’s main street.

Number 27 is on the first floor, accessed via a lift or stairs and a gallery landing that runs by its bedrooms and front door.

The two-bedroom, two-bathroom unit is dual aspect and secretly spacious, something that becomes apparent only as you walk past the first of its two double bedrooms, which has an en suite complete with bath.

It is the property’s open-plan living, and step down into the kitchen, that will really wow. It extends the width of the unit and, although it overlooks the street, it has managed to keep out the noise of the traffic outside.

There is room here for real size furniture, including an L-shaped sofa and an extensively stocked drinks cabinet.

The lounge area steps down into an equally sizeable kitchen that could, through the judicious use of sliding doors, be separated from the lounge. It is the kind of cooking space that you get in family homes and has all the storage a foodie might need. There’s also a big kitchen island that is at least 1.5m by 1m wide, and has a breakfast bar incorporated into it.

In addition to built-in wardrobes in the accommodation, the space has an approximate 10 cubic metres of storage, including a cloakroom and utility room, that wouldn’t look out of place in a good size three-bed semi.

The larger of the two bedrooms is accessed via a hall off the open-plan room, and has a large shower stall bathroom adjoining it. This is where the utility is located. The unit has two water tanks, one servicing each bathroom, and this, coupled with the fact that it is also laid out over several small stepped levels, would lead you to believe that it may once have been two separate units.

When the current owners bought the unit three years ago in 2018, paying €291,000 for it, according to the property price register, it was laid out in its current format. They installed the new kitchen, new floors and new bathrooms as well as upgrading the electric heating system.

It doesn’t come with a parking space although one can be rented. There is also a large but unlandscaped terrace that is a sun trap in the current weather, and has stellar views of the city from Smithfield and the Dublin Mountains. The service charge is about €1,448 a year.