Reimagined and modernised by film design owners, this two-bed is in walk-in condition 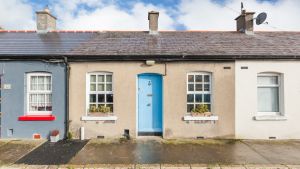 When film graphic designer Annie Atkins and production designer Niall Treacy bought this house in October 2016, paying €292,100 for it, according to the Property Price Register, they had very definite ideas about what they wanted to do.

They both work in film, and their creative skills are evident in the property’s interior. Atkins has worked on big visual flicks like The Grand Budapest Hotel and, most recently, Stephen Spielberg’s remake of West Side Story, currently in post-production, while Treacy created the sets for several episodes of RTÉ’s Bridget and Eamon series and is about to do his first feature film.

“It was the garden that clinched the deal,” Atkins says. “My friends live next door so as soon as the house came up for sale I wanted to see it.” While northeast facing in aspect, it extends to more than 18m/60ft, very sizeable for this part of Dublin 7 where most houses have only a small yard to the rear. It has a greenhouse and a huge sandpit that their four-year old child enjoys.

Atkins brought her talents to bear in the colours used, painting the breakfast counter in Colourtrend’s Furze Lane, a custard shade, while one of the walls is washed in a soft sage green, Sweet Caper. A talking point is the cork wall they installed to dial down the din of the pots and pans hanging nearby; it also helps softens the overall visual look. It’s a large space with plenty of room to work and cook. It also gets good light, she says, and during the summer months they bring the dining table out to the all-weather deck for al fresco dining.

Originally they painted everything white because they felt it would make the 60sq m/645sq ft size feel bigger and brighter but after a while decided to be a bit bolder with colour. The sitting room walls and ceiling are now a slate grey, Colourtrend’s Profound shade. It means the front door opens straight into a dark and moody space, which, while only 15sq m in size, has the high ceilings of the original house.

The G Ber-rated house has two bedrooms. The one to the right of the front door is tiny. At 4sq m it is really suitable only as a nursery or a home office. The main bedroom is to the rear and extends to about 15sq m. The next owner might like to turn the nursery into an en suite bathroom.