Bought three years ago, this Ulverton Road original has been refurbished but retains original details 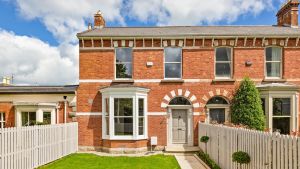 This time three years ago 44 Ulverton Road was for sale by owners who had lived in the Dalkey Victorian for 39 years. The asking price then was €1.2million and it sold just months later for €1.085 million. The buyer, a UK-based businessman intended it as living accommodation for a family member and for his own use on extended visits to Ireland. First though he embarked – mostly by long distance – on a significant upgrade of the end of terrace redbrick which was built in 1886.

From the front the changes are clear in the smartly landscaped garden and the new double glazed bay window and sashes; the windows to the rear are now triple glazed. Inside, the house which he bought as a three-bed is now a 200sq m /2,152sq ft four bed – the large bathroom that was high up in the first floor return is now a bedroom with en suite. There are three other bedrooms with Newcastle joinery commissioned to fit the wardrobes, as well as a family bathroom.

The property’s many original features, most notably the elaborate ceiling plasterwork and marble fireplace in the front reception room, have been retained while new herringbone parquet updates this and the adjoining reception room to the rear.

From there it’s into the reworked and greatly modernised kitchen/dining area – the Aga and pine dresser have given way to a sleek Nolan Kitchen with the full list of extras from wine fridge and built-in coffee machine to the sink macerator and an induction hob fitted in the quartzite worktop. Vast glazed sliding doors open out to the patio garden. There is a utility room off the kitchen, guest toilet and storage room.

The house is being shown unfurnished because no one has lived in here since it changed hands. The new owner’s plans have now changed, not helped by Covid-19 restrictions on travel for the past year. For buyers this time around the property is in modern showhouse condition – albeit with an E1 energy rating – freshly painted throughout, with brand new fixtures and fittings.

Number 44 is one of a terrace of four houses built at the same time and it’s a short walk from Dalkey village’s main street. It’s on the final stretch of the busy Dún Laoghaire to Dalkey road which makes the drive-in to the rear of the property with parking for two cars a bonus. Knight Frank is selling 44 Ulverton Road seeking €1.595 million.