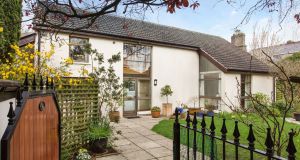 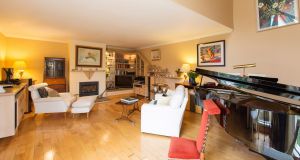 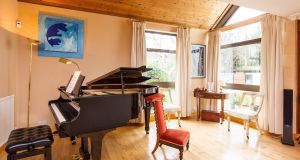 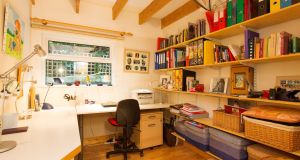 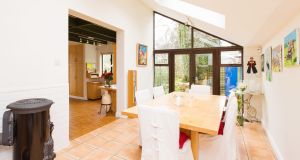 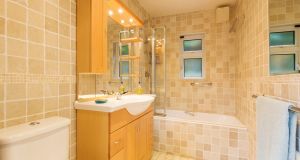 The Barn is a two-storey detached house designed by architect Derek Kilfeather in 1971 on what was the vegetable patch of number one Glenart Avenue, a large period house next door where one of the Barn’s owners grew up.

Accessed via a gated set of steps that open on to the property’s mature and east-facing gardens feels like entering a country cottage. It is very private and removed from the road.

In the 45 years since its construction the original design has been adapted to better suit family life. Originally the livingroom at one end had a double-height ceiling. This airiness has been filled in to add a bedroom overhead. While overall the house is now bigger at 159sq m (1,711sq ft), this room has contracted in scale thanks to its lower ceiling height but it remains big enough to accommodate a three-quarter size grand piano.

The Shaker-style kitchen has roof beams and a Bellingham six-ring hob and feels a bit dark by today’s standards but any concerns fade when you enter the pitched-roof diningroom, a rooflit extension that was added in 1999 to a Kilfeather design.

A Godin stove, sourced from Oven Stoves in west Cork, a sister company to the Old Mill Stores in Leap, warms the room.

Also at ground level is a good-sized study, a room that could have a multitude of uses, including as a den for the kids.

The house retains many of its decidedly 1970s features including a wood-stained open-tread staircase that leads up to a galleried landing. The pitched ceiling at this level is stained the same honey colour as the stairs.

Above the sittingroom is a lofty bedroom, the upside to losing the double-height space in the livingroom. The room has tongue and groove wood panelling on its walls. At the other end of the landing is the master bedroom, a room with wardrobe space built into the eaves and a small en suite shower-room. There are two more bedrooms.

There is no back garden but the front garden is a gorgeous mature space with two lilac trees and a secluded patio area that gets some evening sun.

The detached garage offers off-street parking for one car.

The property is asking €800,000 through agents Sherry FitzGerald.

A letter to my father: Did you regret leaving Australia?
3

How will the Covid-19 era affect our youngest citizens?
9