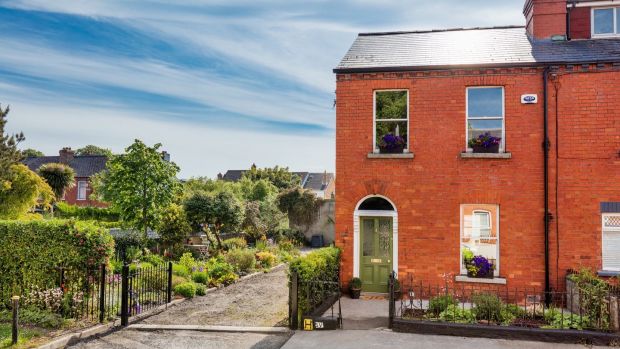 Hidden off Botanic Avenue, Woodville Road is a quiet cul de sac that has direct access to the south side of Griffith Park, the large green space in Drumcondra that is bisected by the river Tolka.

Number 5 is an end-of-terrace redbrick with a beguiling side garden, beautifully planted with a selection of old-school perennials such as lupins and red-hot pokers mixed in with the more fashionable choices such as lavender. Some of these are the result of Mother Nature dictating the design; for example, the owners suspect the pokers blew in from the nearby Botanic Gardens, as they didn’t plant them.

From here it’s a vista of greenery with the space benefiting from the park’s backdrop of mature trees, including an impressive weeping willow. The river runs alongside the garden and you can hear the water in its shallow weirs. The owners have seen herons, egrets and even kingfishers early in the morning and have recently noticed cormorants also fishing in the waters. They’ve also spotted the odd otter.

But before eagle-eyed renovistas consider razing the floral foreground in favour of extending out to the side of the house it is worth noting that the neighbours have a right of way through its off-street parking to the lane to the rear, which at first glance nixes such an idea. However, in the right hands there might be scope to extend out at first-floor level to create a deck, subject to planning permission.

As it is, the house is charming. It opens into a sizeable hall and the reception rooms have been opened up to create a big, dual-aspect room with a sitting area to the front and a dining area to the back. Floored in polished timber boards, each has a cast-iron fireplace.

The kitchen is small, set out in a galley style with access to an east-facing yard, which is about 11sq m and has access to a garage that extends to just over 30sq m. The next owner might look at extending into this space through the kitchen, turning the original kitchen into a utility, which would give you a good-size living/kitchen/diner. You could also look at trying to put a terrace above this, subject to planning.

Up a steep set of stairs there is a dual-aspect, mosaic-tiled bathroom which has a separate shower and bath on the return.

Of the two double bedrooms, the main one is to the front. It is painted a restful shade of blue and has a cast-iron fireplace, as does the second double bedroom to the rear.