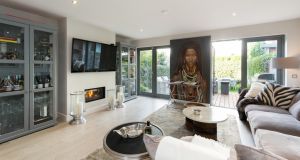 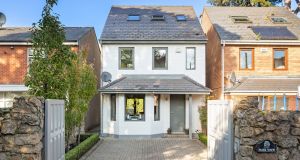 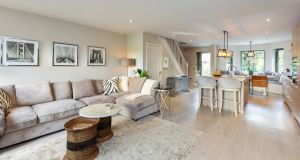 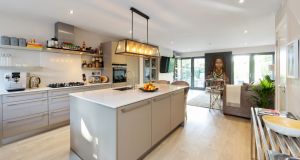 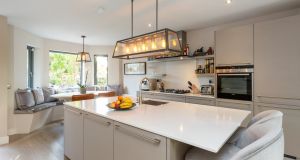 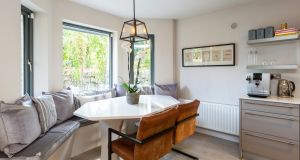 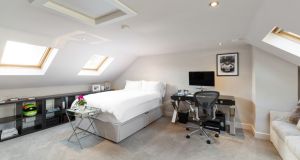 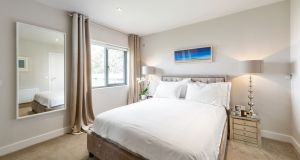 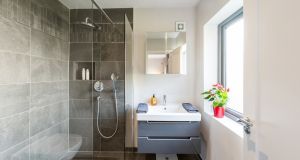 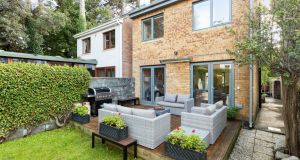 The home of a Bond villainess and a restaurant entrepreneur is far more serene and muted than you might expect.

Situated on leafy Clyde Lane, number 2, Park View, is a chic two-bed mews within seconds of all that Ballsbridge has to offer.

It’s the home of Paddy Hogan, who was ahead of the plant-based food trend with the launch of restaurant Nutbutter, and his wife, actor Ivana Milicevic. The couple have known each other since 2002, when their families holidayed at Harbour Island in the Bahamas.

“I was smitten since I was 19,” he says. Ivana took a little longer to come around; she was busy circumnavigating the globe filming blockbusters like Love Actually and Bond film Casino Royale, in which she plays the female companion of terrorist financier Le Chiffre, as well as appearing in episodes of cult TV classics like Friends and Seinfeld.

Hogan bought the property in late 2013, paying €830,000 for it in January 2014, according to the property price register. It took a further two years to get the funding together for the extensive refurbishment that was needed. He pared the 1987-built house back to its bare bones, replumbing, rewiring and insulating throughout.

The house is tucked away behind gates and a granite boundary wall. Facing southwest to the front, with a park on the other side of the road, it feels far removed from Ballsbridge’s main drag, and has been modernised over time.

“The decor is Cali-simple,” says Milicevic, who is Sarajevo-born and Michigan raised. “I wanted an oasis of calm with muted colours.”

So if not the lair of a Bond villainess which of her characters might best inhabit the space? “A jewel thief now living on the run with a new identity. Carrie Hopewell, of TV series Banshee, would really like this place,” she says.

It opens into a large open-plan area with the kitchen set to the front. The design by Kube includes pale Silestone countertops with a custom-made dining table of the same material set into a windowseat to the front. The laundry appliances are located out of the way under the stairs.

A gas inset fire is the focus of the livingroom and a limed oak laminate floor underfoot pulls the open-plan spaces together. A large L-shaped linen-covered sofa provides plenty of space to stretch out in the lounge and timber-framed glass doors lead out to the gorgeously private back garden.

The garden has ivy-clad walls and a timber deck where a firepit and an infrared outdoor heater have created an outdoor room for dry evenings – even in winter.

Upstairs there are two double bedrooms. The main overlooks the garden to the rear and gets morning light. It has a wet room en suite and a walk-in closet. The family bathroom, bedecked in Calacatta marble effect tiles, is also on this level.

The attic room at the top of the house spans the width of the house and has roof lights to the front and rear. This is where Milicevic films her auditions, to take advantage of the gorgeous light.

The C1 Ber-rated property measures 95sq m/1,022sq ft, with a further 25sq m/269sq ft of space in the attic room, and is seeking €1.25 million, through agent SherryFitzGerald.

The secret lives of Ireland’s Protestants
6

Bernadette McAliskey: ‘I am astounded I survived. I made mad decisions’
7

Miscarriages and IVF: chasing a rainbow baby (and when to stop)
8

Covid jab: Ryanair will not ask for proof of vaccination within EU
10

Samantha Power: I called Hillary Clinton a monster, but I didn’t mean it
Real news has value SUBSCRIBE