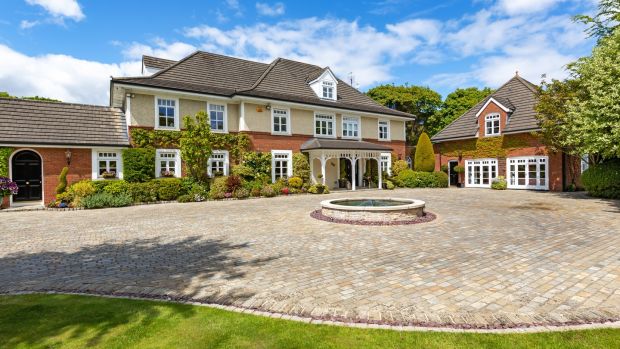 Those who regard their homes as “a great house for entertaining” might want to recalibrate when they see what’s on offer at Tír Na nÓg, a detached property very much at the luxury end of the market in Rathmichael, Co Dublin.

There’s a snooker room, a two-screen gamers’ room with seating for players and onlookers, and a tennis court surrounded by manicured hedging. The indoor heated swimming pool with sauna and shower room is like an upscale spa – there’s a fully kitted-out home gym and weights room adjacent. And when people talk about having a home cinema, they typically mean a screen and a projector; not an actual cinema, worthy of a multiplex with surround sound, retractable curtains and tiered seating – big squashy reclining leather chairs – that seats 15.

The vast custom-built kitchen – painted timber units with marble worktops, country-style with Belfast sink and Aga – opens out to a covered sandstone terrace with barbecue. The adjacent utility room, which also opens to the front of the house, is, says the owner, “great as a prep room for parties”.

Annette and Colm Carroll, owners of souvenir chain Carrolls Irish Gifts, have brought up five sports-playing children in this house having moved in 1997 to the south Dublin enclave from Donnybrook when the children were small. They wanted more space and found it in a new build – detached, Edwardian-style with timber porch, brick and pebbledash – on 1½ acres in Ballybride, a small recently built development of one-off houses off Ballybride Road, minutes from the M50.

Ten years after moving in, they moved out again for a short while to gut the house and nearly double its size, bringing Tír na nÓg to 1,168sq m (12,568sq ft).

Part of the plan overseen by EMD Architects at that time was that the six double bedrooms should have their own en suite bathrooms. The bedrooms are spread over two floors, two at the top of the house facing the rear with a study area. There’s also a one-bedroom guest suite in one wing which could be made into a self-contained unit if new owners needed such accommodation.

The construction of the glazed inner hall in 2007, which gives access to the pool, games area and a home office, made the original living room with formal dining space off the kitchen area and divided by a floor-to-ceiling pocket door an inner room that the owner says they use at night or in winter. Otherwise, the kitchen is sizable enough for a seating area in front of a stove and a dining area.

The gardens, lush, mature with extensive outdoor lighting and beautifully kept by a professional gardener, include a perimeter walkway and the striking feature of a waterfall built into a small hill in the garden so that it looks as if it was there forever. There are two detached garages, though they are not used for parking by the Carrolls as there is space for several cars to the front and the house is set behind electric gates.

With the last of their children set to finish college, the Carrolls are downsizing, selling Tír na nÓg, at 6 Ballybride, through Sherry FitzGerald, asking €4.5 million.