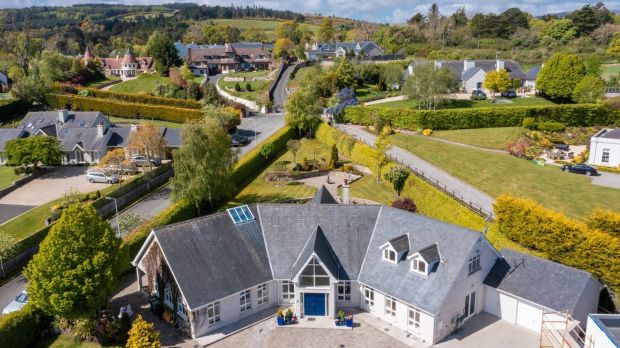 It’s hard to believe that six children grew up in the large Co Dublin house Zita and Edwin Whittaker bought in 1999: it had just been built and little has been done to it since they moved in. But from the polished solid oak floors to the sparkling cut-glass windows and doors (from Carey Glass in Nenagh) throughout the house to the Dalkey Design kitchen to the manicured garden, the home looks in walk-in condition.

“We’re both fastidious,” says Zita, explaining that anything that needs fixing gets fixed right away. But she maintains that the house is very forgiving: “It absorbs everything – we could have our 10 grandchildren visiting and not know anyone’s here.” And it’s a great house for entertaining, they say: Zita goes all out at Christmas, with a tall Christmas tree in the front hall.

The couple aren’t moving far – they’re building a new house next door. It’s designed, says Zita, to ensure that it doesn’t take anything from Mornington Lodge’s views towards the sea. It’s already part-built and the couple have bought trees to screen the new house from their former home.

A long driveway leads from the gate to Mornington, where two wings spread out from a central core. The front door opens into a double-height entrance hall with a timber ceiling, looking up to a galleried landing. Straight ahead is a drawingroom with floor-to-ceiling windows, sandstone fireplace and glazed double doors opening into the garden. To the left is the family living area – livingroom-diningroom and kitchen – and to the right, three of the home’s five en suite double bedrooms. Most of the downstairs rooms open directly to the garden.

The livingroom-diningroom has a vaulted double-height timber ceiling with timber beams and a wall of floor-to-ceiling windows with doors opening into the garden. There’s also a small study off the livingroom. A wide timber arch opens into the kitchen, which also has a high ceiling with timber beams, a stone-tiled floor with underfloor heating, polished black granite island and countertops, a Belfast sink, oak units and a Britannia stainless steel double oven.

A large utility room off it has more fitted units, a double sink, underfloor heating and a door to a covered patio barbecue area outside with a timber ceiling. There’s also a secret room, fitted out as a study, over the utility room, accessed by a pull-down ladder.

All three of the bedrooms off the corridor to the right of the front hall have smart modern bathrooms, all decorated differently: one at the end of the corridor has an en suite with a rolltop bath and a wall part-tiled in bright blue. A separate small guest toilet has an aquamarine rag-painted wall.

The main bedroom, also downstairs, has a good-sized walk-in dressingroom and a really smart fully tiled en suite bathroom with sea green tiles and a corner Jacuzzi bath, twin wash-hand basins in a marble-topped counter with lighted glass-bricks below.

One of the two bedrooms upstairs was originally meant to be the main bedroom: it’s a large carpeted space which also has a walk-in dressingroom and a tiled en suite, with a corner Jacuzzi bath and a shower. There are good views from here as well as from the galleried landing towards the sea. Another bedroom/office on the top floor has a steeply pitched timber ceiling, oak floor, walls painted red and an en suite shower room. There is easily accessed under-eaves storage from the bedrooms.

Edwin designed and takes care of the gardens, on a sloping triangular site. Sheltered by tall hedges, a carefully tended lawn slopes from a circular brick patio up steps to a granite rockery. There’s also a detached garage beside the house, and plenty of room to park outside.

Mornington Lodge, 2 Rathmichael Haven is one of eight large detached houses in a cul-de-sac. It’s a quiet location, part-rural, part-suburban, in easy walking distance of Rathmichael Woods and the Leadmines, but also in walking distance of Shankill village, the Dart at Shankill (20 minutes’ walk, say the Whittakers), the Bride’s Glen Luas stop (a little less than 20 minutes) and the 145 bus.