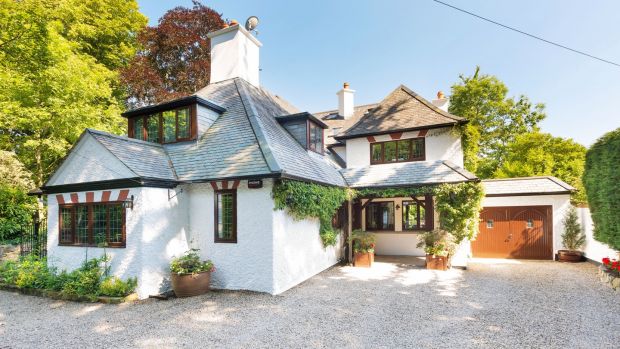 It’s a bit of an understatement to say that a house that was once the gate lodge of Sir Horace Plunkett’s Kilteragh House in Foxrock has been extended. When the owners of Leafy Hollow bought their house on Westminster Road in 1997, it was a 120sq m (1,300sq ft) two-bed built in the early 1900s. They embarked immediately on a major revamp with architect Niall Brennan and by the time they moved in in July 1998, it was a 307sq m (3,300sq ft) four-bed with some very striking features – particularly a soaring glazed double height extension in the drawing/dining room overlooking the tree-filled rear garden.

Leafy Hollow was one of two gate lodges of Kilteragh, a house built by Sir Horace Plunkett, founder of the Irish co-operative movement and a Free State senator, in 1905. The then cutting-edge modern house was burned down in 1923 by the IRA but the two Arts and Craft style gate-lodges with their leaded windows, Leafy Hollow and Rusheen, remained.

The owners of Leafy Hollow carried out their renovation in keeping with the style of the original house – all the rooms have leaded windows, for example. But they added their own very distinctive stamp, particularly in the drawing/dining room: here, a 10-seater dining table sits in the dramatic glazed extension which is overlooked from a mezzanine room above.

Stairs in the corner of the drawing room lead up to this space, variously called a library/bar/music room/TV room by its owners: it’s a cosy brick-lined room with a bar, sofa and piano in the corner.

Leafy Hollow is in very good condition, though it is likely new owners may want to change some of the attractive but now dated interiors. The extensive use of brickwork and timber beams throughout does manage to feel in keeping with the home’s original style.

Accommodation in Leafy Hollow includes a very large family room, study and toilet at the front of the house downstairs, a long kitchen and drawing/dining room at the rear. The kitchen/breakfast room has a brick-surround island with a polished granite countertop, cherrywood units and a Rangemaster in the brick chimney breast; French doors open from here out to the deck at the rear.

A good-sized utility room opens off the kitchen with a door into a garage which could be converted if new owners wanted even more space. Floors throughout the house are either timber or tiled.

There are two staircases leading upstairs, one from the front of the house, the other from the drawing room. The main bedroom at the back of the house has a vaulted ceiling, a tiled en suite with shower and a clawfoot bath and a good-sized dressingroom. Another en-suite bedroom has a spiral staircase to a mezzanine area where the owners’ daughter had her bed.

The back garden outside is filled with trees and shrubs, with a rockery, pond and a tall ivy-covered tree stump at its centre: the owners had to cut down a number of trees to bring light into the house. There is plenty of room to park in the gravelled front garden.

Leafy Hollow is a short drive from Cornelscourt shopping centre, the N11 and the M50, and a fairly short walk to Foxrock village. While it is not a protected structure it doesn’t appear to have development potential, unlike some other houses on very large grounds in Foxrock – for example, eight houses are currently being built in the centre of the village on the corner of Westminster Road and Torquay Road, on the former site of a house called Clonbur.