Rambling Bray rectory a perfect blend of old and new for €2.85m 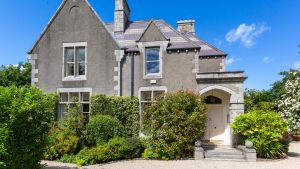 Not surprisingly, Cairness, a former rectory on Church Road in Bray, is listed in the National Inventory of Architectural Heritage where it is noted as “a well preserved late Victorian house which displays early hallmarks of the arts and crafts style”.

And that’s for the handsome exterior with its quartz stone and granite dressings, including stone mullions on several of the now expertly restored sash windows, the Tudor arches and the gabled half dormers in the pitched blue-black slate roof.

The property, which is set back from the road on one acre behind a screen of trees, was built in 1878 for the rector of Christ Church across the road from his church which had been finished about 10 years before. The busy architectural firm of Millar and Symes in Dublin were commissioned and the rectory was built at a cost of £2,800, probably donated by parishioners.

Its owner, Emer, had long admired the house from afar when she bought Cairness about 14 years ago. She then set about renovating the rambling rectory to restore, modernise and extend the property to create a comfortable family home of obvious substance and a great deal of style.

An indication of the quality of the work undertaken throughout – as well as the considerable budget spent – is the glazed, timber-framed 50sq m (540sq ft) wraparound extension to the side and rear. An airy bright build, designed to be reminiscent of a Victorian orangerie, it made space for a conservatory-type seating area opening out to a sunny patio at one end and into the kitchen at the other.

That work brought the house to 498sq m (5,360sq ft). John Daly was commissioned to design and build the kitchen units in solid wood with marble worktops where the design is a perfect blend of country and contemporary and includes a vast island unit.

Continuing the mix of old and new, the appliances range from a cream six-oven electric Aga with a four-gas companion hob to a bank of stainless steel larder fridges. There was already a sizeable kitchen in the house but that has been transformed into a vast walk-through larder – again fully fitted with John Daly bespoke cabinetry to match the kitchen. It’s all very smart. He also fitted out the adjacent utility room.

There are two staircases in the house – not unusual in large Victorian homes – and both have been retained. The rear one, a modest flight of stairs, leads up to a room originally used for Sunday school but is now the first of the home’s five double bedrooms. Three are en suite and two share a family bathroom.

The main bedroom, with views across the treetops to the church spire, is a suite; its dressingroom fitted with bespoke cupboards, shelving and wardrobes made by mastercraftsman Dave Prickett.

The main staircase is a much grander affair with large roof lights throwing daylight down to the hallway far below – in homes of this period it’s all about bringing light in.

The porch entrance with its set of original panelled double doors opens into an encaustic-floored lobby and then into the main hall. The first room – once the rectors’ office – is now a formal diningroom though Emer says that if she had her time again it would be a cosy library.

She does have a home office though and there are two livingrooms, a grander one, and one that is probably most used as it opens into the extension. While the bathrooms are ultra modern as is the sophisticated security system, decorative wallpaper in several rooms and cast-iron radiators throughout nod to the Victorian era.

The gardens were laid out and now maintained weekly by SAP landscapers and are divided into sections, the most striking – and romantic – being the lavender and box hedge formal parterre. There’s no fear that the family pet will disturb any of the lush planting as behind the detached garage there’s a purpose built dog run.

Now that the children have grown and left home, the owner is selling – though she’s keen to stay in Bray which she finds convenient for the commute to work in Dublin and packed with amenities and services – something the family have enjoyed since they moved to Cairness from a more rural part of Wicklow.