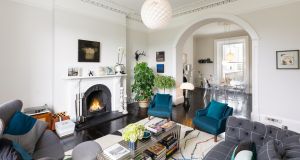 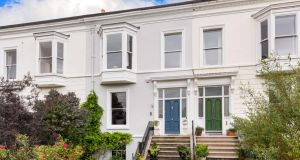 A Victorian mid-terrace four-bed on one of Dún Laoghaire’s more handsome squares retains most of its carefully refurbished original period details – and they’re shown off to good effect by minimalist modern decor.

French interior designer Amélie Dollé and her husband bought 9 Royal Terrace East in 2017 for €1.05 million and embarked on a major revamp, continuing work begun by its previous owner. Now the 294sq m (3,164sq ft) two-storey over-garden-level property is for sale through Sherry FitzGerald for €1.595 million.

The 1860s house has some distinctive period details, such as the three centre roses in three panels edged by elaborate cornicing in the front hall.

Working with Dún Laoghaire conservation architect John McLaughlin on the listed building, the Dollés rewired, replumbed and insulated, stripped the original floorboards and stained them deep brown and draught-proofed the sash windows. At garden level, they excavated, insulated, installed underfloor heating and floored the area with polished concrete.

They reconnected the garden level (which had been a self-contained apartment) to the main house but stopped at adding the by now almost ubiquitous open-plan kitchen/living extension. “If you do that, you never use the reception rooms and we wanted to occupy the whole house; it’s always busy,” says Amélie, who has two sons. Instead, the kitchen is in the return at the end of the front hall.

Most of the walls in the house are painted white, and that, along with modern light fittings, artwork and furniture make the house very bright and stylish. There’s elaborate cornicing in the drawing room at the front of the house with striking art by Irish artist Duda on the walls. A wide arch opens into the diningroom, where an oval marble-topped Saarinen tulip table is surrounded by Philippe Starck chairs. Both rooms have white stone fireplaces with ornate black cast-iron insets.

The kitchen has a marble-topped counter and breakfast bar, integrated white units, a wide pull-out larder and polished granite floor. A glazed door opens to steps leading down to the garden.

A very smart family bathroom, separate from the toilet beside it on the first return has a large marble-tiled walk-in shower separated from the sink and bath area by a partition. One wall of the bathroom has green patterned Collinson wallpaper beside a freestanding oval bath.

The main bedroom is possibly the most striking room in the house, combining modern fit-out with period details, like elaborate cornicing, a white marble fireplace and two windows overlooking the railed and well-maintained four-acre park between Royal Terrace East and West.

A second double bedroom looking over the rear garden has a small en suite shower room; there’s another tiled bathroom with shower beside a third bedroom on the top return.

At garden level is a large study that could work as a fourth bedroom, separated by a sliding door from a sitting room/den, which opens through glazed doors into the back garden. There is separate access from the front garden to this level, which has a kitchen-cum-utility, a smart tiled shower room and a wall of fitted oak-veneer storage units in the hall.

Steps lead across the back lawn to a 40sq m (430sq ft) garage, which opens onto a rear laneway. This could, subject to planning permission, be converted to a home office/studio. The railed front garden is filled with roses. There is residents’ permit parking outside.