Six large double-fronted houses in a small development in Killiney have an A2 energy rating, a bright, open-plan layout downstairs and come with an array of high-end flourishes 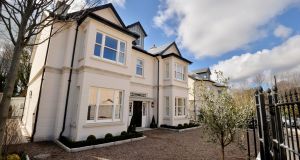 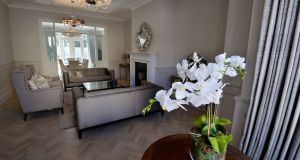 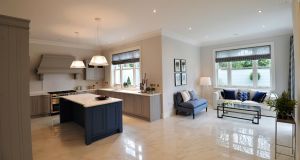 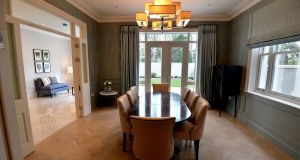 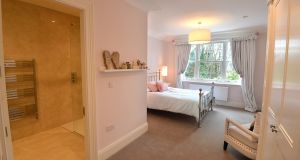 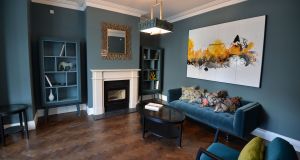 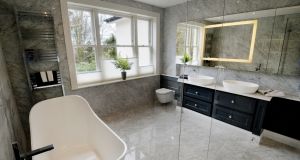 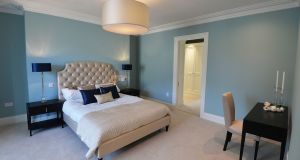 The design of a small development of new homes in Killiney is aimed at buyers who want a period-style house but with every modern comfort. There is a fridge in the kitchen under the stone-topped island unit that keeps red and white wine at the right temperature, a large walk-in dressingroom – with shelving for shoes and handbags – off the main bedroom, underfloor heating and central vacuuming. In addition, the houses have an A2 energy rating.

Balure is a small scheme of six large houses being built in the grounds of Balure House, a large period house on 1.9 acres on Church Road in Killiney that sold for €3.25 million in February 2015. The original house is due to be refurbished and sold later. There will be a play area on half an acre at the front of the site.

The houses will have small variations, but all are 362.32sq m (3,900sq ft) five/six-bedroom homes on about a seventh of an acre, selling from €1.5 million to €1.65 million through agents Hassett & Fitzsimons.

Outside, the double-fronted houses, with deep, square bay windows in rooms upstairs and down on both sides of the front door, are period-style. Inside, a traditional staircase sweeps up from the front hall, with timber panelling on hall, stairs and upstairs landing, as well as in the livingroom. Ceilings are 3.2m (10’ 6”) high. But the very bright, open-plan layout downstairs is all modern: you can see from the front of the house to the back from the hall and the livingroom.

The parquet-floored livingroom has glazed double doors into the diningroom, which in turn opens through glazed double doors into the back garden. The very large open-plan kitchen/lounge at the back of the house has onyx-topped counters and island unit, a five- burner Rangemaster oven, a boiling-water tap, a full fridge and full freezer, all as standard. A utility room off the kitchen has onyx countertops too.

The lounge opens into the diningroom and, like the hall and kitchen, is floored with tiles. There’s a good-sized family room to the left of the front hall, and a smart downstairs toilet.

Upstairs, five of the six bedrooms, all doubles, are en suite. In the showhome, fitted out by interior designer Mary Ryder, bathrooms are fully-tiled with contrasting tiles on walls and in showers. The main bedroom has that walk-in dressingroom and a very large en suite with oval sinks, shower and a slipper bath.

The top floor has two rooms, one en suite, and good under- eaves storage with easy access. The whole top floor could be a suite for an au pair, or a place for teenagers (or even parents?) to hide away.

Outside, there is a posh timber shed (called a pavilion) in the relatively small back garden.

The Balure development is in a cul de sac off Balure Lane, a long, narrow road off Church Road which leads up to a pedestrian entrance to Killiney Golf Club. It’s close to the junction of Church Road and Wyattville Road (R118), which leads to the M50.

Jennifer Rock, The Skin Nerd: ‘I was motivated by people’s perceptions of me as a teenage mother’
8

The Debenhams picketers: ‘We are like a little family’
10