Old world with new finish on Orwell Park for €2.25m

Semi-detached house built in the 1870s retains many period features 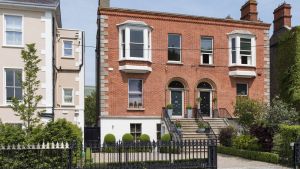 It’s just over 10 years since 1 Orwell Park in Rathgar last came on the market. Then, in early 2006, in typical boom-time fashion it was put to auction and with an AMV(advised minimum value) of €3 million, selling afterwards for a figure in excess of that amount.

The buyers who were trading up from nearby took nine months to move in as they embarked on an extensive renovation and redecoration programme that included digging out the basement level to increase its head height. Then it had five bedrooms but the work involved creating a master bedroom suite taking up the entire first floor and turning the rear bedroom into a bathroom en suite so the house now has four bedrooms.

That vast bedroom has both upper front windows – a tall sash window and a deep oriel window. The three other bedrooms, all doubles and two with en ensuites, are in each level of the return.

A semi-detached house, tall with grand Victorian proportions, and a large example of its type with 3400sq ft (316sq m) of floor space, it was built in the 1870s and retains many of the period features of the time. The fine reception rooms with feature fireplaces off the wide hall interconnect (though their folding doors have been removed) and these rooms as well as the main bedroom upstairs have fine decorate plasterwork.

The layout at garden level was altered to create an open plan space – living area to the front, living in the middle, eat-in kitchen at the back. This is fitted with a grey gloss stylish and sleek Boffi kitchen complete with large island.

The flooring through this level is black stone – something that new owners might change as the rear of the house is north facing and a brighter colour might reflect more light.

Also at this level is a utility room and shower room. If new buyers like the distinctive taste of the owners and appreciate their attention to detail down to the Alessi bathroom fittings, they’ll move in and not change a thing.

One of the biggest changes to the house is outside – 10 years ago there was nothing visible beyond the granite wall at the end of the north-facing rear garden, now the the garden is overlooked by the new Marianella apartment development. To the front there is off-street parking for three cars.