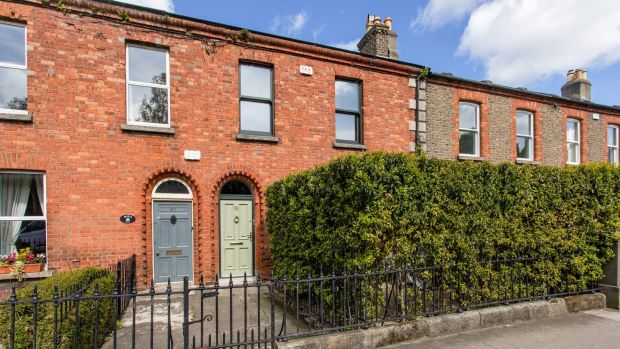 A young professional couple had no illusions about how much work they’d have to do to modernise the terraced Victorian house they bought in 2010. They had lived in the downstairs flat for a year before buying the house, which was built in about 1870: it had been partitioned into two flats, had no insulation, no central heating, and old wiring, and the back garden was full of rubble.

They refurbished the garden first, in 2011-2012, before embarking on a no-expense-spared total modernisation project in 2016. The result is a very smart, B2-rated house that’s part period, part very modern, with features like Crittall-style doors and windows, a small internal courtyard, and polished concrete floors in the extended part. It has been rewired, replumbed, insulated, and has solar panels and underfloor heating on the ground floor.

Now 22 Shelbourne Road, Ballsbridge, Dublin 4, a 196sq m (2,100sq ft) terraced three-bed is for sale through Sherry FitzGerald for €1.3 million, just over double the €647,500 it sold for in 2010. Number 22 is close to the Bath Avenue end of this long Shelbourne Road terrace, more or less equidistant from Lansdowne Road and Grand Canal Dock Dart stations, and close to the Aviva stadium. It’s an increasingly trendy location near the neighbourhood dubbed Google 4, with coffee and food shops such as Lotts & Co, Foodgame and Avoca nearby.

The mint green front door opens into a front hall which, like the two reception rooms on the right, has a whalebone (slightly wider planks than herringbone) oak parquet floor; walls are painted Farrow & Ball French grey and Charleston grey. The drawingroom on the right has original ceiling coving and new triple-glazed sash windows – which cut the traffic noise – and a fireplace with a marble mantelpiece.

Double doors in a wide arch open into the livingroom which has a wall of bookshelves and Crittall-style black aluminium-framed glazed double doors by Reynaers opening to the internal courtyard. Metal-framed Crittall-style doors and windows are associated with Art Deco design, and this house has a definite Art Deco flavour in its fit-out and furnishings; the couple had admired Crittall style in London and New York townhouses.

Matching doors on the other side of the courtyard open into the large kitchen-diningroom-family room extension. The kitchen from Blackrock Kitchens has a wide roof window over the Silestone-topped island and countertops; units are painted a kind of teal blue; and there’s a white subway-tiled splashback.

A raised coal-effect gas fire has a brick wall surround and there’s a neat walk-in pantry off one corner of the room. Mirrored sliding doors at the end of the front hall, just before the kitchen, conceal a storage-cum-utility area plumbed for a washing machine. There’s also a downstairs toilet.

There are double doors at either end of the floor-to-ceiling glazed Crittall-style kitchen windows opening into the back garden. This is 100ft long and very private; it runs down to the Dart line and is divided between a sandstone patio and a neat lawn, bordered by trees and neatly trimmed hedges and bushes.

Upstairs, there are three bedrooms; two small doubles, one of them en suite, and one large double at the front of the house. This has a walk-in dressingroom and triple-glazed sash windows like the drawingroom below. A family bathroom is prettily tiled and has a bath and double sink.

A railed front garden has a space for parking bikes screened by high hedging. There is residents’ disk car parking on Shelbourne Road.