New Homes: Autumn off to a brisk start 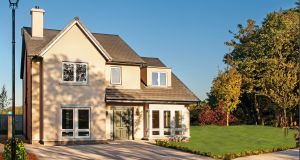 For the first time since the downturn, the autumn selling season has been characterised by a steady flow of new homes schemes to the market. The take-up has been brisk, reflecting the pent up demand for newly built three- and four-bed units.

Last weekend saw the launch of the first 20 houses in a 118 unit development at Diswellstown Manor in Castleknock. Selling agent Hooke & McDonald reports that all 20 houses in the Andrews Construction scheme were sold at the weekend launch, prompting them to then release another 15 houses off plans at launch prices of between €480,000 and €555,000, half of which are now sold. That development is due for completion by 2017.

Staying in the Castleknock area, a week earlier the same agent sold 17 houses at the launch of 20 three- and four-bed homes in Flynn & O’Flaherty builders’ Fairhaven scheme of 130 units near Phoenix Park, where houses are selling for between €500,000 and €620,000. The nearby Bracken Park scheme by Cosgraves, in its second phase, is also selling well, with 12 units sold.

In the same week, and not far from Fairhaven, Sherry FitzGerald sold 50 houses at the launch of Hamilton Park, by Park Developments. On the first day alone, 30 of the original 44 houses on offer had been sold. Three- and four-beds were seeking between €390,000 and €495,000.

Also in early September, Gannon Homes sold 32 houses at Fairbrook in Malahide, a development of three- and four-bedroom houses – this in addition to the 100 sales in the adjoining Miller’s Glen over the last 12 months. Around the same time, another large scale scheme, Belarmine Woods in Stepaside, a 126 unit development by Joe O’Reilly of Castlethorn Construction, sold 60 houses at its launch of three-, four- and five-beds priced between €340,000 and €525,000.

At the slightly higher end, a small infill scheme of just six terraced houses in Milltown built by newcomer John Roche of Woodchester Developments, has sold five of the six family homes within four days of its launch. Priced between €825,000 and €895,000, three properties sold on Thursday last, when the scheme was first advertised by Guardian Properties in this paper, including the fully furnished showhouse. Within 15 minutes of the open viewing on Saturday, a fourth sold, and a fifth sold during the Sunday viewing. One unit remains.

In Foxrock, another upmarket scheme, Fey Yerra Wood, sold seven of the eight Durkan-built houses priced between €845,000 and €925,000 through Hooke & McDonald, at its mid-September launch.

Rokeby Park in Lucan, a new low density development of 71 sizeable A-rated detached homes by Michael O’ Flynn of O’Flynn Capital Partners, priced from €675,000 to €760,000, has recorded 15 sales through Sherry FitzGerald since its launch several weeks ago.

Further afield, and targeting the investor market, Hooke & McDonald had a 100 per cent hit rate on launch day when 12 upgraded two-bed apartments on the Mount Juliet estate in Thomastown, Co Kilkenny sold outright at the launch weekend on October 3rd. Located between the clubhouse and Mount Juliet House and priced between €340,000 and €390,000, six of them were sold on a two-year sale-and-leaseback basis.