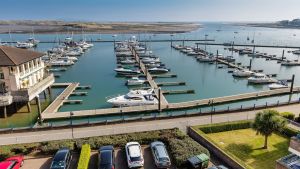 Ireland’s first residential marina was constructed in 1994 in the sheltered Broadmeadow Estuary adjacent to the seaside village of Malahide.

The complex – which was completed in 1997 – consists of 407 apartments and duplex units in addition to 350 serviced berths.

Number 356, one of the penthouses, was purchased in 2015 for €466,000. “It was all white at the time and to be honest it felt a bit like a hospital,” recall the owners. They engaged Elaine Verdon of interior design company Leo + Cici to transform the penthouse, who gave the 100sq m (1,076sq ft) unit a complete overhaul with the use of strong colours – echoing its maritime location.

When it comes to living near the sea, the key selling point is sea views and here they do not disappoint. A large balcony runs the length of the apartment with panoramic vistas to Island Golf Club and Lambay Island, in addition to the berths along the waterfront.

This is a place where boat owners can check their craft by simply looking out their windows, and set sail within minutes of leaving their home.

The property at 100sq m, is the size of many city houses, has two fine sized double bedrooms – one of which is currently used as an office. Both bedrooms, which lie to the rear of the penthouse have access to a second large balcony.

For mariners, annual berthing costs are €416 per metre and Malahide has two vibrant yacht clubs. The local beach is a 10-minute walk, and the location itself on the Broadmeadow Estuary is an important area of conservation for more than 15 species of birds including Brent Geese.

On the doorstep of the marina village are a gym, dry-cleaners and holistic centre in addition to a number of restaurants. The Dart is a 10-minute walk away.

Malahide village sells itself and is just a 15-minute drive to the airport, which will appeal to buyers who travel. The historic 800-year-old Malahide Castle is now a well-established concert venue, and forthcoming events include Lana Del Rey and Brendan Grace.

The penthouse, in turn-key condition, is on the market through Sherry FitzGerald with an asking price of €635,000.