Look on the Brighton side in Rathgar for around €1.7m 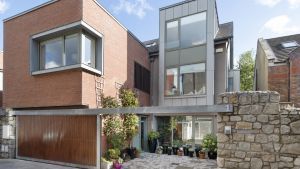 In number 1 Brighton View, one of three mews houses designed by Greg Tisdall on Harrison Row in Rathgar,  the sought-after Dublin architect managed the difficult balance of designing an obviously contemporary house that’s edgy and spare yet still works as a comfortable family home.

That includes upscale creature comforts while retaining a toasty A3 energy rating, thanks in part to a long eco list that includes solar panels, a concealed rainwater harvesting tank, heat pump and high levels of air tightness and insulation.

The family now selling number 1 Brighton View, the largest of the three, says that their annual energy bill comes in at less than €1,000.

Set behind a large sliding timber door in traditional mews style, the house is significantly larger than it appears, with 372sq m (4,000sq ft) of accommodation spread over three floors plus basement.

The original plan when it was built in the early 2000s was for a six-bedroom home – all doubles – but the owners who bought about eight years ago have configured it as a four-bedroom house; one of the bedrooms, on the top floor, is now a study (when working from home became a reality, Cooney electrical was brought in to upgrade the connectivity and install category 5 and 6 Ethernet cabling for seamless video conferencing). And a sixth bedroom is now lined with wardrobes to create a luxurious dressing room.

Two of the bedrooms open on to a shared terrace while the main bedroom has an en suite and walk-in wardrobe. The family bathroom is fully tiled with contemporary fixtures

The front door opens from a paved parking area into a wide hall where the core feature, literally and visually, is a custom-designed oak stairwell soaring to the Velux-lit top of the house, its height and honeyed tones emphasised by a dramatically suspended modern light fixture.

At hall level is an L-shaped open-plan kitchen, living, dining area with a sliding screen that if required could section off the kitchen from the rest of the room. The key feature here are the glazed walls to the front and across the rear where there is access to the rear garden.

Interesting features abound such as the two-sided fire, inset low into the wall to serve the hall on one side and the seating area on the other. Little has changed in the house from the original design but the seating area has been improved by the current owners who commissioned Klimmek Furniture to design a wall unit around the fire that would incorporate shelves and a cupboard to conceal the TV when not in use and a panel to give definition to the dining area.

The ceilings are 3m high – which along with extensive glazing, adds to the airy feel – while the floors are Jura marble.

The basement has a large, oak-floored room (used as a playroom), a bathroom and utility room. As it is also accessed from an exterior staircase to the rear – and the house has a side entrance – it could also make an ideal bedroom for an older teenager. There’s also a comms room, and a plant room, as well as a sizeable cloak room and toilet off the entrance hall.

Harrison Row runs parallel to Terenure Road East, joining Rathgar and Brighton roads – with number 1 Brighton View close to Brighton Road, hence the name. There is off-street parking in the paved area to the front and a good sized low maintenance rear garden.

The young family are moving, they say, “towards the coast” to be nearer to relatives and have placed 1 Belgrave View on the market through Lisney seeking €1.7 million.