Long-awaited Terenure Gate homes in demand ahead of launch 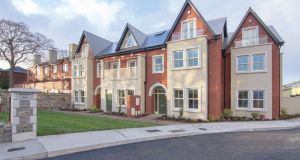 Terenure Gate: a mix of apartments and three-bedroom-plus-study terraced houses

Developer Laurence Keegan’s Kimpton Vale made headlines in 2006 for demolishing an 1830s convent without planning consent. The building was part of a three-acre site on Terenure Road West that sold for €15 million in April 2006. The firm was fined €1,000 and costs in 2008 after pleading guilty to illegally razing a building.

Launching this Saturday, Terenure Gate is the first phase to be constructed in this scheme. When finished, the development built by Kimpton Vale will comprise 51 units, a mix of apartments that will be sold off plans, to include a mix of two-bedroom and three-bedroom duplexes, and three-bedroom-plus-study terraced houses.

Phase one comprises 19 units and interest in the A3-rated scheme has been high. DNG negotiator Aidan O’Leary says more than 600 parties have already registered an interest .

But it is the houses that are generating the strongest interest, according to O’Leary. Set over three floors, each has three bedrooms plus a study that could work as a fourth bedroom. Spacious, they include thoughtful features such as stairs of a moderate incline to the first and second floors, unlike some other three-storey builds where steep stairs can detract from the overall finish. The kitchens are by Bedroom Elegance and have counter tops made of the ceramic material Velstone, but do not include any of the appliances that feature in the two showhouses, tastefully decorated by Helen Turkington.

Redbrick-fronted, with granite lintels and sills, the properties are in four different styles.

There are two end-of-terrace homes of another style, measuring 185sq m/ 2,001sq ft. With a formal sittingroom to the front, this design has an asking price of €895,000.

All of the houses come with two car-parking spaces. Of these, the spaces belonging to the three-bed end-of terrace and the three-bed mid-terrace are not directly outside the properties but across the driveway instead.

The apartments and duplexes each have one car-parking space.

The detached gate lodge has also been refurbished and is asking €700,000. This three-bedroom period property measures 113sq m/1,225sq ft.

Keegan has built several estates in Castleknock, most notably Collegewood, Collegefort, Park View and Talbot Downs and Court. His firm also did Eagle Valley at Powerscourt, Enniskerry, and Windmill at Porterstown.