With six bedrooms, Mayo house overlooking Clew Bay has space for a crowd 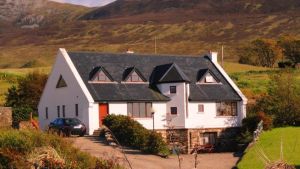 Clew Bay lies in front, Croagh Patrick behind, and Westport is 14km away from the house on the Wild Atlantic Way that Dubliner Ray Brennan built in the village of Lecanvey, Co Mayo, in 1998. He and his family used it as a holiday home for close to 20 years but now his children are in their 20s and at this point, “it’s just too big a house to look after”, he says.

For a holiday home, it is unusually large: the 418sq m (4,500sq ft) six-bed on half an acre of gardens has a large games room in the basement as well as two bedrooms, but there’s plenty of space to create two more bedrooms here, for a buyer interested in turning the house into a guest-house, says Brennan. (A musician as well as a businessman, Brennan had had plans to build a recording studio with recording booths in the basement; he already has a recording studio in his Dublin home.)

The house at Lecanvey with views of Clew Bay, between Wesport and Louisburgh, is now for sale for €550,000 through Eithne Foy of FM Auctioneers in Louisburgh.

Accommodation in the house consists of a large livingroom running from the front to the back of the house, a kitchen/diningroom and an en suite bedroom on the ground floor. Upstairs, there are three bedrooms and a bathroom and a further two bedrooms, as well as that games room in the basement. The ground and top floor are timber-floored, with a tiled floor in the basement.

There are views from most rooms of Achill, Clare Island and Clew Bay, says Brennan. Locals start their climb up Croagh Patrick behind the house, a climb which Ray and his children “did many times”. Outside, the gardens – “which took an awful lot of hard work” – are landscaped. And it’s just five minutes’ walk to Staunton’s pub, adds Brennan.

Enya breaks her silence on fame, privacy and music
4

Green-fingered garden is to dye for
6

Jimmy Gralton, the only Irishman ever deported from Ireland
9