King of the hill in Monkstown for €3.75m 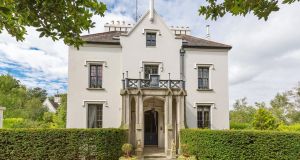 Tudor Hall, the Hill, Monkstown, Co Dublin has an asking price of €3.75 million 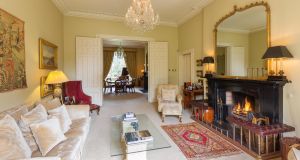 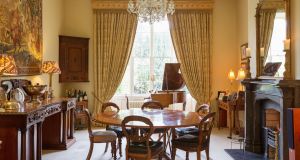 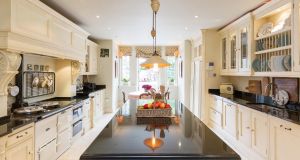 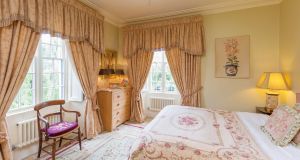 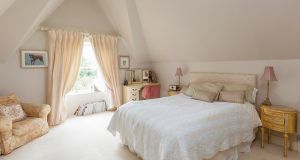 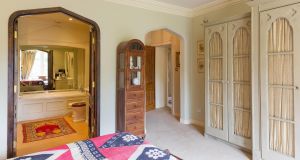 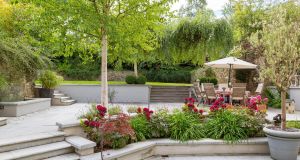 Set at the top of the Hill in Monkstown, Tudor Hall along with its semi-detached twin Tudor House were constructed in the early 1840s. The house is believed to have been built for the Earl of Longford as his summer residence and its design is attributed to Sir Richard Morrison, the prolific architect whose work included Tudor style additions to Kilruddery House, and classical additions to Mote Park in Roscommon and Carton House in Kildare. He was also responsible for works at St Mary’s Pro-Cathedral during 1816.

The property operated as a hotel in the latter part of the 19th century until it was purchased by Daniel Cullimore, a veterinary surgeon and barrister, eventually becoming home to the Coogan family in the 1920s. In his memoir, Tim Pat Coogan historian and writer, remembers his life here as having “financial security, servants and a lively social life”. His mother Beatrice penned her novel The Big Wind at Tudor Hall.

Latterly, the house was also the birthplace of the late David Collins, the acclaimed architect and interior designer who died in 2013. At the time Wallpaper magazine wrote: “it is no exaggeration to say that the restaurant and hotel revolution in London of the past two decades would not have been the same without him”. His legacy includes the Wolseley Hotel, Claridge’s and the Connaught Bars.

Besides designing some of London’s best-known institutions, his private interior consultancy service was engaged by countless high-profile clients including the singer Madonna, who described Collins as a genius and “this handsome Irish fellow with nerdy glasses and blue suit who changed my life”. They became lifelong friends with the singer attending his Monkstown funeral.

As his architectural career reached its peak in London, Collins’s former family home Tudor Hall in Monkstown was in a sorry state by the time it, and its semi-detached neighbour Tudor House were purchased by architect Don Henihan who brought both properties back from the brink.

The property then became home in 2003 to interior designer Sally Armstrong and her family, who undertook further work to bring the house to what it is today – a stunning four-storey 501sq m (5,500sq ft) home in turnkey condition.

Built in the highly decorative Tudor revival style with characteristics such as an elaborate granite portico, high chimneys, mullioned windows, latticework verandas and steep gables, the house is a combination of superb period features married with additions for contemporary living.

The property radiates from a central hallway, where specialist paint effects in the form of sandstone blocking were created by Henrietta Bisgood and Robbie Keating. The formal reception rooms at this level include a library and interconnecting reception rooms – the proportion of the bay window in the diningroom is large enough to accommodate a baby grand piano. Besides ceiling roses, period fireplaces and coving the rooms also have elaborate architraves.

Most of the family living is conducted at garden level in a large country kitchen and informal livingroom. The rear gardens, accessed through French windows are exceptional. Designed by landscaper John Durston, and set over three levels, the project involved the removal of eight loads of soil to accommodate the garden space directly off the kitchen on one level.

When Armstrong purchased the house, the top floor contained one bedroom and a vast open space, which has now been reconfigured to three bedrooms – an additional three bedrooms are on the first floor. Of interest are the vaulted ceilings created by the steep pitches of the roof.

Internal woodwork – in the form of the country style kitchen and handmade bedroom units – all echo the gothic-style finish of the house, giving an indication of the attention to detail in the refurbishment of the property.

In addition to the main house, there is a 185sq m (2,000sq ft) detached mews. Currently used as storage, this space could easily be transformed into additional accommodation – subject to planning.

Tudor Hall is a very striking property, filled with interesting details that give it an abundance of character. It stands today as testament to the skilled craftsmanship of the 19th century.

While extensive in size, none of the rooms have that overly grand feeling and Armstrong says she and the family use all of the rooms. Now, with a looming empty nest the property is simply too large for one couple. Colliers International is the selling agent seeking €3.75 million for the house and mews on 0.5 acres of gardens.